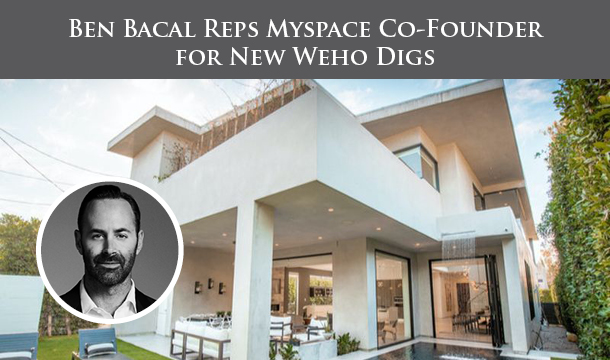 BEVERLY HILLS, Calif(April 26, 2019 )-We all know Tom from Myspace (well anyone born before the year 2000). Ben Bacal of Rodeo realty recently closed sale with Tom Anderson on his new West Hollywood abode. Mr. Anderson purchased the home from the Chainsmokers Drew Taggart last week and the deal has already garnered press attention.

The home was built in 2016 and stuns architecturally with slick features, open spaces and 4,758 square feet of living space. The LA Times picked up the story and described the home as an “open-concept space, awash in shades of gray”. The main floor features modern fixtures with a floating staircase leading to the top level living quarters. While the outside boast a second story fountain feeding into an infinity pool of the covered patio.

The home is located in the Melrose District which is an ideal location for trendy shops and restaurants.

Those familiar with the Chainsmokers will know of the Grammy winner Drew Taggart and their hit singles like “Don’t Let me Down” which was number 3 on the Billboard Hot 100.

And those that grew up at the start of Social Media will know well of everyone’s friend Tom. The MySpace Co-Founder established the social networking site in 2003, serving as the company president after it was acquired by News Corp in 2005.

The home was purchased for $3.8 Million.

Ben has paved the road with over 2 billion dollars in sales and catapulted to the highest echelon in Southern California real estate within his ten years of selling. Ben is best known for his role in catapulting the median home sales prices and median home sale price per square foot over the past five years in The Bird Streets and Trousdale Estates – arguably two of the most exclusive neighborhoods in Los Angeles. Ben was the first person ever to sell a property for $20 million in Trousdale in 2009, subsequently causing the price per square foot in the neighborhood to double from $1500 to $3000 per square foot. Today, Bacal continues to drive pricing with record-breaking sales in not only Trousdale Estates and The Bird Streets, but also Bel Air, Beverly Hills Proper, Beverly Hills Post Office and other parts of the Hollywood Hills, Santa Monica, Venice Beach, Brentwood and Malibu and he has recently entered Hidden Hills and the exclusive Westlake real estate market with notoriety

Ben has built his real estate marketing prowess from the ground up after relocating from Toronto to Los Angeles at the young age of 17.

Ben has significantly contributed to driving up prices in the  Los Angeles’ luxury residential landscape.

Rodeo Realty is a residential real estate firm that has more than 1,200 licensed agents and brokers and 12 offices throughout Los Angeles and Ventura counties.

Operated under the direction and vision of a single owner, Rodeo Realty stands today as one of the largest independent real estate companies in the nation, while still maintaining the friendly approach of the neighborhood REALTOR®. As the largest independent real estate brokerage headquartered in Beverly Hills and operating throughout the Los Angeles area, with the highest sales volume, Rodeo Realty has the resources to provide the best tools in the industry to deliver the very best results.