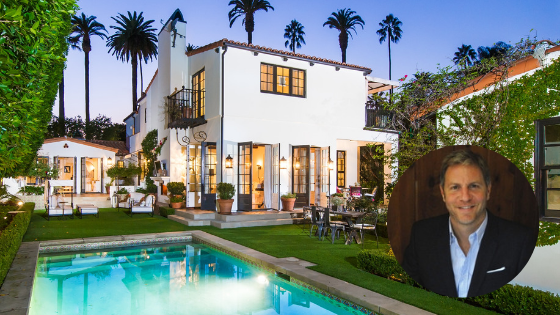 20th Century Pictures Founder’s Former Estate is up for Sale.

BEVERLY HILLS, Calif (May 10, 2019)- The former home of Media Mogul and 20th Century Pictures(now Fox) Founder Darryl Zanuck recently hit the market. Listed by Rodeo Realty’s John Galich, the abode has already began to receive press coverage. A name synonymous with Hollywood new and old, the estate was home to Zanuck and actress Virginia Fox during the 1920’s-40’s.

It was during his residency in the Spanish Colonial that he left Warner Brothers to found Twentieth Century Pictures in the 1930’s. The Golden Era estate still remains much of its old world charm after undergoing a recent renovation. The LA Times described the home stylishly, noting “the lavish living spaces mirror the glitz and glamour of Hollywood’s golden age”.

The property brims with the classic charm of that time carefully blended into its recent multi-year rebuild and restoration featuring updated modern amenities. The estates original details have been beautifully enhanced by the addition elegant touches like countless French doors that allow for a more modern indoor-outdoor flow. Outdoors, the walled and gated grounds are lushly planted with specimen trees and tall hedges that allow for privacy and multiple areas for entertaining guest amongst a lavish setting.

Nestled in Beverly Hills, the exquisite abode is ready for its “close-up” and next Hollywood chapter.

Darryl Zanuck who passed away in 1979, earned three Academy Awards during his prolific film career. During his time at Twentieth Century Pictures, later becoming Twentieth Century Fox, he produced notable hits like “Les Miserables”, “Moulin Rouge” and “The House of Rothschild”.

This listing is held by John Galich and Co-listing agent Dan Schott.

Our team brings the highest level of discretion, attention to detail and care to a client base that ranges from the first time buyer to experienced investors. We provide a comprehensive knowledge of Los Angeles real estate that includes Beverly Hills, Hollywood Hills, West Hollywood, Hancock Park, Los Feliz, Silver Lake, Prime Valley neighborhoods and out to the Beaches… We represent a collective 48+ years in Real Estate bringing all of our own market experiences to the team.