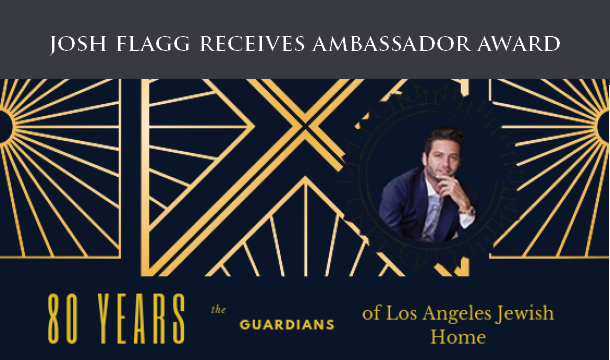 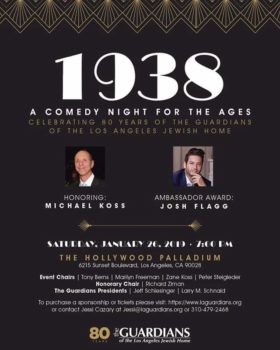 BEVERLY HILLS, Calif (May 9, 2019)-Mr. Flagg is at it again. Not with his vloggs (although they are worth the watch as a weekly treat), but as an impressive community member. A born and raised Angeleno, Josh Flagg has always made it a point to give back to his community. It should therefor come as no surprise that earlier in the year he was presented with the Ambassador Award by the Guardians of Los Angeles Jewish Home at their 80th celebration.

The mission of the Guardians is to provide financial support for seniors and needy members of the Jewish community served by the Los Angeles Jewish Home, through residential and community-based programs. The organization was founded in 1938 by a handful of volunteers.

Josh currently serves on the ‘Guardians’ executive board. Along with his contributions to the ‘Guardians’ Josh also sits on the Board of Governors for Cedars-Sinai Medical Center in Los Angeles.

It is through their ongoing philanthropic endeavors and presence as LA residents and top-producing agents that their impact can be seen throughout and even beyond Los Angeles.
In Josh’s own words, “My grandparents and parents instilled in me at a very young age that giving back to the community is the most important thing you can do if you’re privileged enough to do that, not only financially, but privileged as a human being that you would want to help other people with your time.”

Josh Flagg is one of America’s most successful and sought after luxury real estate agents, having completed more than two billion dollars in residential real estate sales in the past 13 years. As of 2015, Flagg has become the number two volume agent in Los Angeles and the number three agent in sales in California.
His record sales and unrelenting work ethic have Josh currently recognized by The Wall Street Journal as one of the top-ranked agents in California and nationally by sales volume and as a top 25 real estate agent by The Hollywood Reporter. He has been the agent for many of Hollywood’s biggest names including Adam Levine, Steve Aoki, Shonda Rhymes, and Chicago’s Robert Lamm to name a few. In 2012 Josh earned the distinction of being named a Forbes’ 30 under 30.
Josh is the star of Bravo’s hit show Million Dollar Listing Los Angeles now in its tenth Season and he has appeared on the show since its debut season. Josh also regularly appears as a real estate expert on various Fox Business shows, CNBC’s Squawk Box, NBC’s Today Show, E!, CBS The Insider, Bravo’s Watch What Happens Live, ABC’s Good Morning America, as well as in the pages of The Wall Street Journal, Los Angeles Times, Forbes Magazine, and Variety among others.

About The Guardians of Los Angeles Jewish Home: