Metro is offering free rides all day on Sunday, April 22, otherwise known as Earth Day. This applies to rail, buses and bike shares.

Metro’s The Source notes that to use one of their bikes free of charge, you’ll need to enter the promo code 4222018 when checking out a bike. After 30 minutes, the standard rate of $3.50/30 minute will kick in, but riders can avoid this fee by docking the bike sometime within 30 minutes and checking it out again.

Metro also has plenty of suggestions as to where you can take your free ride. There’s the Los Angeles Times Festival of Books at USC, which runs both April 21 and 22. Showing your TAP card will net you a 10% discount on fest merch. Your TAP card will also get you $1.25 off adult admission at the Natural History Museum at Expo Park, accessible via the Expo Line, and $1-2 off admission at the Aquarium of the Pacific in Long Beach, accessible via the Blue Line.

Other Metro-friendly activities include CicLAvia’s ‘Heart of the Foothills’ event, the Dodgers vs. the Nationals at Dodger Stadium, Thai New Year Songkran Festival in Thai Town, and the Renegade Craft Fair at L.A. State Historic Park. For more inspiration from Metro, click here.

How’s this for a holiday gift from the city of Los Angeles: Enjoy a few drinks this New Year’s Eve without worry about finding a designated driver or dealing with Uber and Lyft surge pricing.

As in years past Metro will be offering fare-free rides late into the night on New Year’s Eve. Ride Metro rail and bus lines free of charge from 9 p.m. December 31 until 2 a.m. on January 1, 2018. All rail lines will run every 20 minutes. All Metro Rail Line Stations with fare gates will be unlatched and fare boxes and validators will not deduct fare.

On NYE, in addition to the free hours from 9 p.m. until 2 a.m., Metro will operate 24-hour, overnight service on Metro Rail, plus the Orange line (the rapid bus line that makes its way across the Valley from North Hollywood to Woodland Hills or Chatsworth) and the Silver line (a limited-stop bus line which travels from El Monte and Downtown L.A. all the way to San Pedro). Get more details on riding Metro on New Year’s Eve here.

If your New Year’s Eve plans include attending the N.Y.E.L.A. celebration at Grand Park, you’ll be happy to know that there will be enhanced Metro rail service to accommodate the thousands attending the free DTLA festivities. In addition, show your TAP card at a Grand Park information booth and get a free pair of 2018 party glasses.

As always stay safe, and enjoy the holiday festivities as we mark the turn to 2018.

Starting March 2018, Sunset Strip visitors will be able to get around on the weekends a little bit easier.

The West Hollywood City Council has voted to pilot a free six-month shuttle service for the Sunset Strip area.

The shuttle will go west along Sunset from Fairfax Avenue before turning south on Doheny Drive and heading east along Melrose. The shuttle will turn back north along San Vicente Boulevard to Sunset and continue east until dipping down to Santa Monica Boulevard between Crescent Heights Boulevard and Fairfax–providing better connectivity with popular restaurants such as Laurel Hardware.

The shuttle is expected to run between 7 p.m. and 3 a.m. on Friday and Saturday nights.

The pilot program is meant to promote nightlife around the strip and gives visitors a better option than the $30 parking lots. Aside from that, it will allow people to travel the Strip without worrying about driving while under the influence.

After the six months, the city will assess the program’s effectiveness and to decide whether to continue it further. 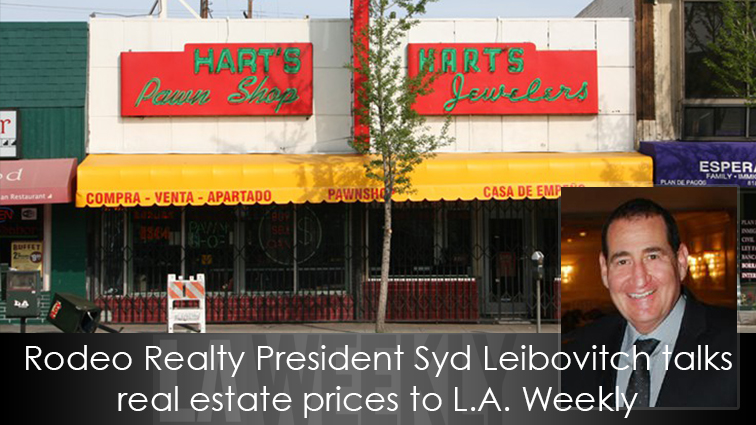 The newspaper is raising the question after The Metropolitan Transportation Authority announced its new transit plan on Friday. According to L.A. Weekly, the plan includes a rail tunnel through the Sepulveda Pass, connecting the Valley to the Westside, plus a new transit line along Van Nuys Boulevard, all the way up to Sylmar.

Writer Gene Maddaus spoke to Syd Leibovitch, owner of Rodeo Realty–the Valley’s biggest real estate firm, to see if the plan would cause housing prices to skyrocket in Van Nuys.

“While real estate prices in the rest of L.A. have shot up dramatically in recent years, in the Valley prices are only now reaching their 2007 peak,” said Leibovitch. He said the 405 commute plays a large part in that.

“A new transit line would change prices dramatically,” Leibovitch told L.A. Weekly. “If they drill a tunnel under the Sepulveda Pass, I think the whole Valley would go up. It would be a great thing.

According to the article, it’ll be 2027 before the lines open. Several decisions still have to be made, including on whether the line will be a bus rapid or a train.