A lot of changes are coming to Disneyland, including the transition of California Adventure’s Paradise Pier to Pixar Pier. This is on top of alterations to the Pirates of the Caribbean Ride as well as the forthcoming Star Wars land.

Let’s start with Pixar Pier. The attraction officially opens June 23, coating the long-standing pier in a warm Pixar veneer. According to Disney Parks Blog, this includes the addition of the Monsters, Inc.-inspired Adorable Snowman Frosted Treats stand, where, most importantly, you can get lemon dole whip. Elsewhere, the Toy Story Toon: Small Fry-inspired eatery Poultry Palace will serve turkey legs, while Señor Buzz Churro Stand will offer, well, churros. Fittingly, Poultry Palace renderings depict some of that California-classic programmatic architecture in the form of a building that looks like a takeout container with an attached juice box. Meanwhile, Angry Dogs—themed for Inside Out—will serve hot dogs. 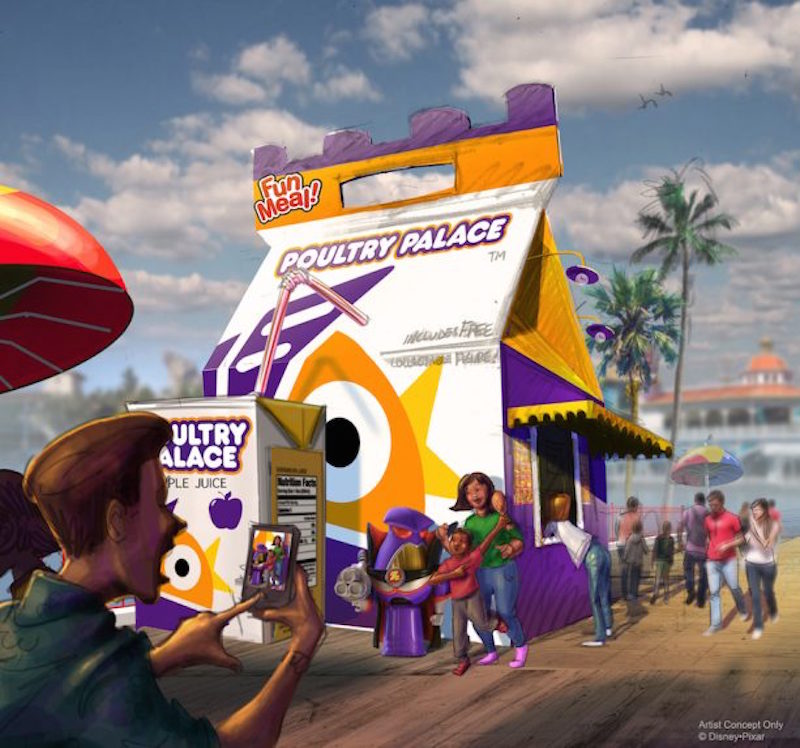 Also opening on June 23 is the The Incredicoaster, a refresh of the existing California Screamin’ coaster. According to the OC Register, the revamp includes minor engineering upgrades, but more significantly, will incorporate a story and characters from The Incredibles. As the narrative goes, the family is being honored for their good deeds with this very roller coaster. However, the family’s youngest child, Jack-Jack, is not tall enough to ride. Jack-Jack finds his way onto the coaster anyhow, and the rest of the family spends the ride trying to catch up to him.

Pixar Pier is also getting a new gastropub, Lamplight Lounge, where guests can enjoy a plate of lobster nachos—a holdover from the restaurant’s former identity, Cove Bar—and a cocktail with a view of the park. Guests who wish to say goodbye to Cove Bar will have a window between March 16 and May 28.

Coming to Pixar Pier in 2019 is Jessie’s Critter Carousel, which will replace King Triton’s Carousel. The ride features Toy Story 2‘s cowgirl Jessie and swaps out sea creatures for 56 woodland and desert friends. 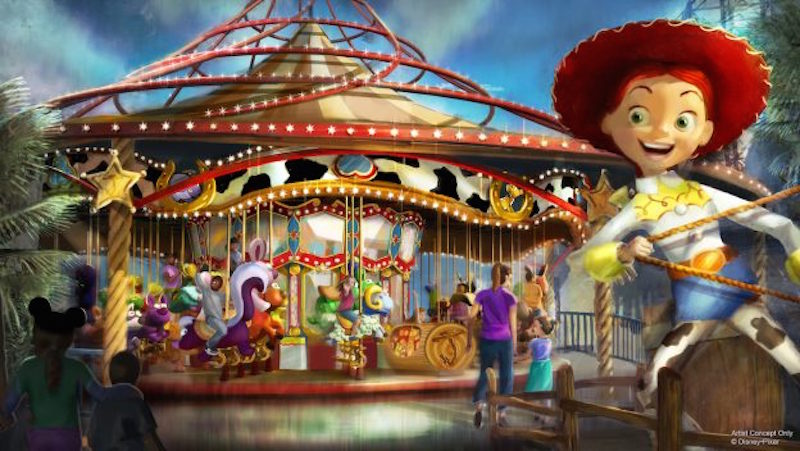 Over at Disneyland, the much-anticipated Star Wars: Galaxy’s Edge is slowly coming together. Drone footage released on Disney Parks’ social media channels gives a glimpse of the sprawling attraction, albeit covered in scaffolding.

Additionally, the long-standing Pirates of the Caribbean ride at Disneyland will close on April 23 for a brief makeover, the OC Register reports. The changes will see the removal of the controversial ‘bride auction,’ in which a group of pirates auction a line of bound women off to the highest bidder, including a redhead in a scarlet dress posing for potential buyers. In this new version of the ride, the same redhead will be a pirate herself and will instead be auctioning off loot.