The World Cup may be headed back to North America in 2026, and Los Angeles leaders are seeking to ensure the city plays a role in hosting the enormously popular soccer competition.

On Monday, the city council’s Budget and Finance Committee took the first step in bringing competition to the city, asking city staffers to prepare a report on the bidding process for the event.

In June, the Fédération Internationale de Football Association (FIFA), which oversees the World Cup, will decide whether to award the competition to Morocco or to Canada, the U.S., and Mexico—which submitted a joint North American bid.

If the latter bid prevails, those three nations would be responsible for hosting a total of 80 games played over a roughly one-month period. A total of 32 cities, including Los Angeles, in all three countries are being considered as host sites for the games—should the North American bid succeed.

At least 12 of those cities would host at least one event, and former U.S. Soccer president Alan Rothenberg told the committee it would be “inconceivable” if some of those matches were not be held in the LA area.

Less clear is whether any events would be held in the city itself. In 1994, when World Cup events were last held in the United States, all eight games in the LA area took place at Pasadena’s Rose Bowl. Inglewood’s under-construction NFL Stadium and the Los Angeles Memorial Coliseum are also in contention this time around.

But plans for the competition may not be limited to picking venues. The committee also asked officials to examine how to position Los Angeles as the best candidate for the global media headquarters during the games.

According to the motion approved by the committee Monday, more than $80 million could be pumped into the local economy during the event if the city serves as the media’s base of operations during the competition.

Rothenberg also told the committee that plans were in the works for a “30-day fan event” that would attract visitors even on days when games were taking place in other parts of the continent.

The tech giant is expanding beyond the limits of its current 8 million-square-foot base of operations in Seattle and sent cities around the continent into a frenzy when it announced a pageant-like search for a new location in September.

On Thursday, the company trimmed a list of 238 cities down to just 20, with the company seemingly favoring an eastward expansion. Los Angeles is the sole finalist on the West Coast, despite bids from major urban areas like San Diego, Portland, and San Francisco.

The company received plenty of interest from Southern California cities, including Irvine, Santa Ana, Huntington Beach, and Long Beach (the latter cities submitted a joint proposal). But Los Angeles is the only city left standing.

Details on LA’s proposal, put forth by all of Los Angeles County, are still a bit murky. In October, local officials revealed that the bid would largely center around the Pomona Fairplex—the home of the LA County Fair.

City Councilmember Bob Blumenfield also argued that Warner Center’s former Rocketdyne plant would be an ideal location, but it’s unclear whether that site appeared in the city’s formal proposal submitted to the company in October. 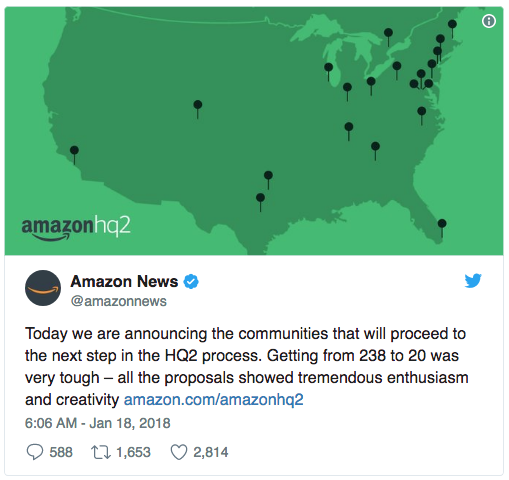 The impact of the company’s arrival in Los Angeles would be significant. Amazon estimates that its new headquarters would create more than 50,000 jobs and bring $38 billion of investment into the local economy (though Seattle residents can attest that such economic transformation can be a mixed blessing). 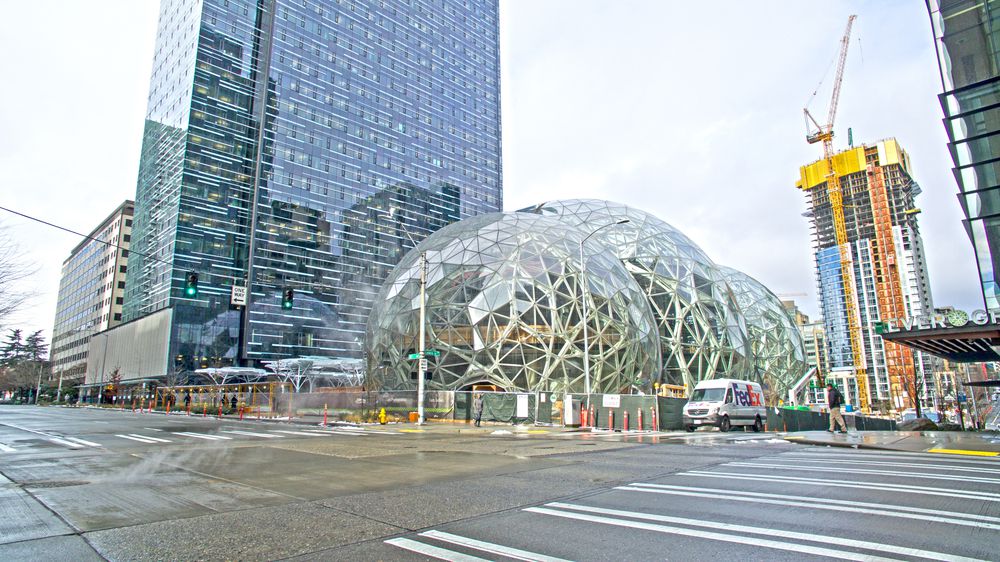 With its finalists in place, Amazon now plans to probe each city’s proposal further, delving into specifics about the feasibility of each bid. The company says it will announce a winner later this year.

The International Olympic Committee voted unanimously on Wednesday to name Los Angeles as host for the 2028 Summer Olympics. L.A. Mayor Eric Garcetti signed the host city contract in Lima, Peru shortly thereafter, officially locking in L.A.’s plans to host the Olympics for a third time. L.A. previously hosted the games in 1984 and 1932. The city of Paris was awarded the 2024 games, which L.A. had previously been vying for. 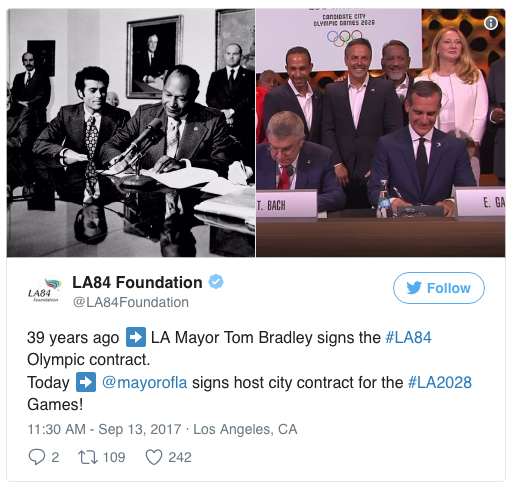 The success of L.A.’s bid had been all but a done deal since July 31, when L.A. reached an agreement with the IOC after weeks of negotiations. “It has been certainly a roller coaster,” L.A. bid chairman Casey Wasserman told the L.A. Times at the time.

“This is a momentous day for the people of Los Angeles and the United States. For the first time in a generation, we are bringing the Games back to the City of Angels,” Garcetti said Wednesday, according to City News Service. “L.A. loves the Olympics because the Games have lifted up our city twice before. But to us, the Games have always represented an even brighter future and the chance to harness the power of sport and the Olympic Movement again to inspire the next generation—for the next 11 years and beyond.”

L.A. City Council approved bringing the Olympics to L.A. in 2028 in a unanimous vote last month, despite not yet having an approved budget for the new bid. Meanwhile, a growing coalition of local activists known as NOlympics LA has been protesting the forthcoming games, which they argue will bring increased displacement and police militarization to the city. “Despite the fact that the IOC has awarded LA the bid to host the 2028 Summer Olympics, the fight isn’t over,” NOlympics organizers said in a statement released late Tuesday night.

Amazon has been based in Seattle since its founding in 1994, but the e-commerce giant is planning a second headquarters elsewhere in the U.S., and Los Angeles is officially in the running.

Mayor Eric Garcetti’s office confirmed that Los Angeles was planning to bid on the new Amazon headquarters, with Garcetti calling L.A. “the perfect place for a company like Amazon to find talented workers, and an environment that nurtures growth and innovation,” in a statement emailed to LAist on Thursday.

Amazon announced plans to put $5 billion toward the construction of its second headquarters in a request for proposals from potential bidders. “We expect HQ2 to be a full equal to our Seattle headquarters,” Amazon CEO Jeff Bezos said in a statement on Thursday. Amazon will give priority to cities to cities with more than one million residents that are within 45 minutes of an international airport, according to the L.A. Times. Other cities planning to bid on the new headquarters include New York, Chicago and Atlanta, CNBC reports.

If selected to host Amazon’s new offices, Los Angeles could gain up to 50,000 new full-time jobs. The city is already home to Amazon’s thriving film and TV division, Amazon Studios, whose offices are located in Santa Monica (and could soon be moving to Culver Studios’ famed Gone With The Wind mansion.)

Not everyone is likely to be enthused about the possibility of Amazon expanding to Los Angeles, though. The tech-industry gentrification driving up prices in Venice’s “Silicon Beach” would likely increase with Amazon’s arrival, and Curbed raises the question of where L.A. would even fit an 8-million-square-foot Amazon complex. Nonetheless, it appears L.A. will fight to win the Amazon bid by the October 19th deadline.