Supermarket Shopping can be a chore, but British artist Lucy Sparrow has made the mundane task into an experience so joyful that it’s even worth waiting in line for. She’s hand-stitched over 31,000 felt-covered plush replicas of grocery store items for her whimsical Sparrow Mart art-exhibit-meets-shopping-spree at The Standard in Downtown.

On the second floor of the hotel an entire room has been transformed into a grocery playground of sorts with shelves fully stocked with felt goodies that are all for sale throughout the month of August. In the produce section, smiley and doe-eyed avocados, potatoes and watermelons fill large cardboard bins, that are, of course, also covered in felt. White gondola shelves are stocked with Reese’s Puffs and Frosted Flakes cereal boxes, Jif peanut butter jars, and KitKat and Skittles bags — all hand-painted with striking attention to detail. If that wasn’t enough, there’s even a felty ATM machine at the entrance. 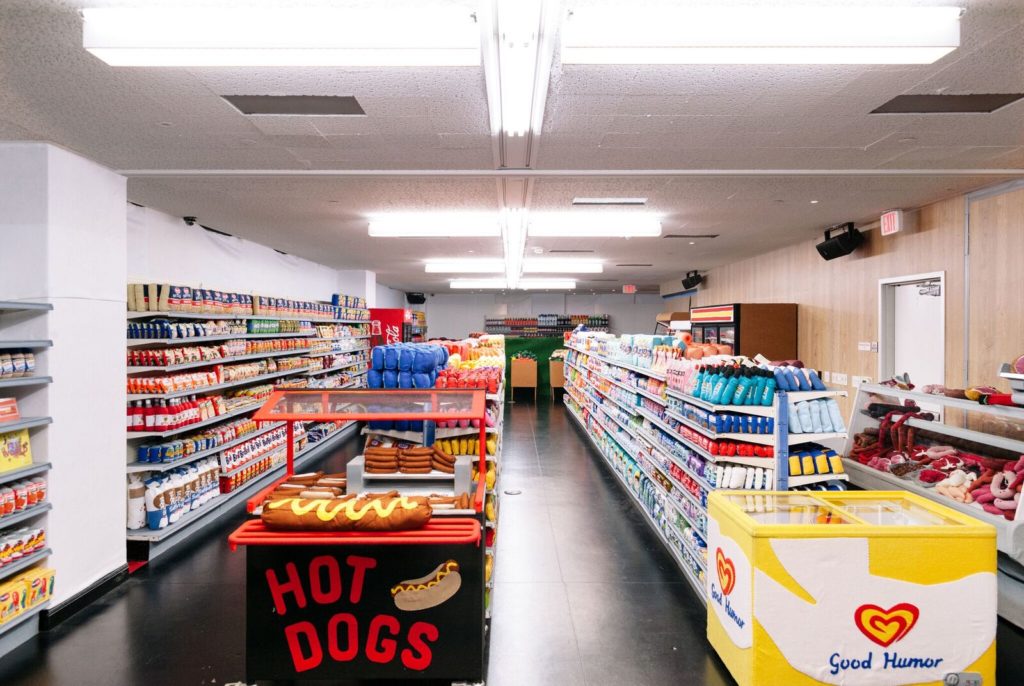 “I decided to work with felt because I find that it’s a medium that is so synonymous with being a child,” Sparrow said in an interview with The Cut. “It’s an easy fabric to work with, it doesn’t fray, it’s available in all the colors you could possibly think of. So, I thought, I wonder if I could make an entire shop that if you’re daydreaming, it looks similar enough that you could go there thinking it was real.”

There’s an interactive component that brings childlike wonderment to many of Sparrow’s objects, like a felt-shrouded soda refrigerator with doors that open up to Coca-Cola and Snapple bottles, and a gum-ball machine that dispenses plastic capsules containing Dubble Bubble candies glimmering from its blue metallic fabric. At the overwhelmingly massive selection at the sushi glass counter, visitors get to pick out their favorite cut rolls and fill a black plastic sushi tray with the items. To add to the experience, guests can use actual shopping carts and baskets to hold their goods and line up at the check-out counter to purchase them. 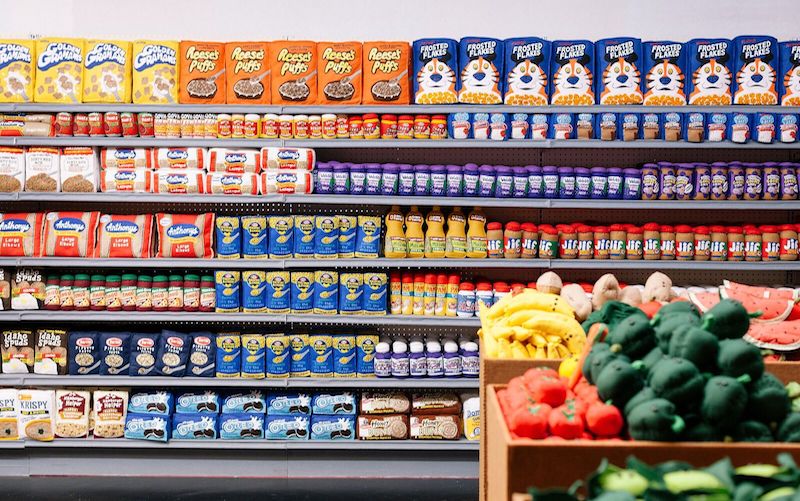 Hidden within this dizzying array of art pieces are Sparrow’s more playful and irreverent items, where she even manages to make things like alcohol bottles, Trojan condom boxes, Gas-X meds and Marlboro cigarettes cute. As an added bonus, a blue display case features Sparrow’s hand-made recreations of 1980s VHS and Betamax movie boxes like Footloose and Ghostbusters.

While the price tag of the items range from $1 to $50,000, pieces like a Twix bar will run you $35, a head of cheery cabbage for $40 and sushi at $10 a piece. If you happen to have very deep pockets, you can buy an entire seafood case filled with lobster, fish and clams for $50,000. Don’t forget to make your way to the back room behind the check-out counter to scope out some of the more expensive pieces of art, like a shopping cart filled with an assortment of grocery items and a Playboy magazine, or a Warhol-esque shadowbox of pastel-rainbow Campbell’s Condensed Tomato Soup cans. 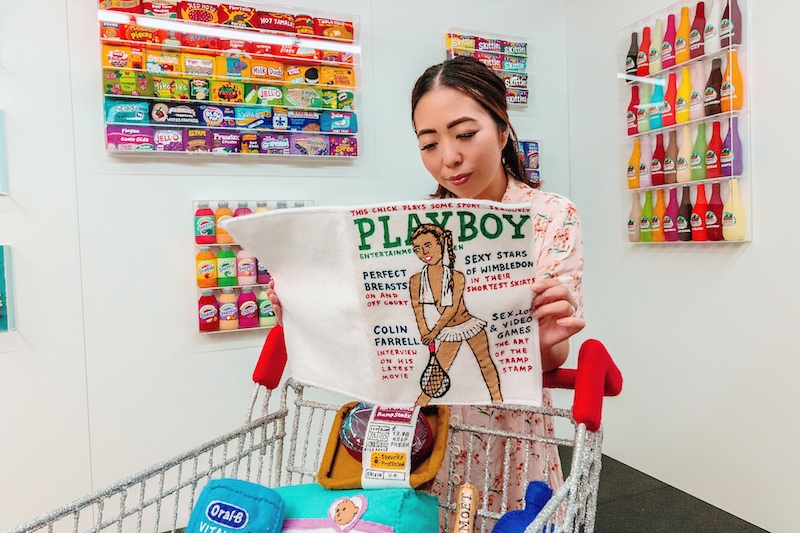 A total of 50 visitors can be in the store at once and stay for 30 minutes at a time. All it takes to get into Sparrow Mart is checking in with the hosts at the hotel lobby before heading up the escalator to the store. Since there are no reservations, keep in mind that this exhibit is first come, first served.

If all that faux food shopping gets your stomach growling, there’s a British-inspired pop-up eatery downstairs in the lobby and in the hotel’s 24/7 restaurant that coincides with the Sparrow Mart installation. Here you’ll find snackable items like a sweet-and-savory Sparrow hand pie stuffed with confit duck and acho blackberry barbecue sauce, or a New Delhi Grilled Cheese sandwiched between melted cheddar and Beemster with mango chutney. If you want to go very meta, the hotel also offers combos where you can eat the real versions of the felt creations, like a raspberry-and-blueberry pop tart, and then take its plush counterpart home. Same goes for the homemade Moon Pies and a Tapatio cocktail made with mezcal and lime. 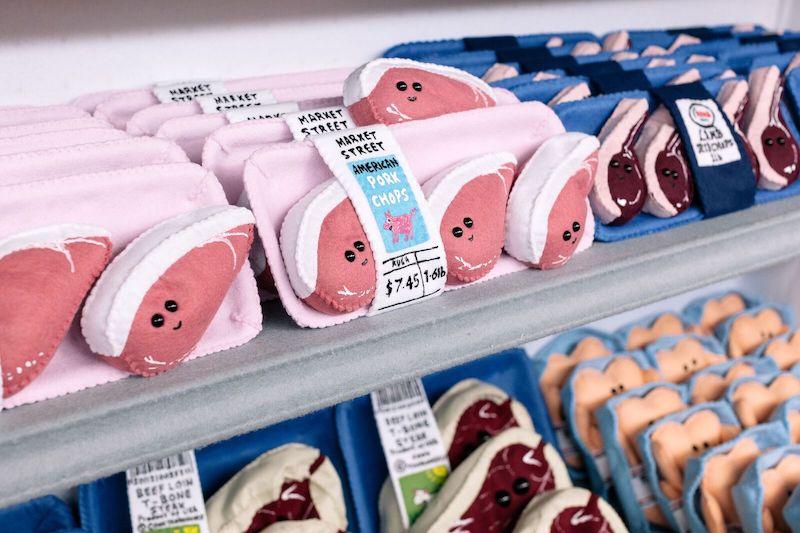 Sparrow Mart is the artist’s fifth felted show, following her New York appearance where she debuted her 8 Till Late bodega at The Standard at the Highline and sold out everything in two weeks’ time. It took Sparrow and her five-person team a full year in her “Felt Cave” studio in Essex, England to create all the pieces for this L.A. show.

“I am very interested in military history and everything to do it, warfare and the grizzly events of people getting harmed. What better to turn it on its head than to use a fabric that is so innocent and childlike, it just completely messes with your head,” Sparrow told Wonderland Magazine.

Sparrow Mart is the artist’s largest installation to date. While that means that you’ll have a larger selection of items to choose from, it doesn’t mean that it’ll make it any easier deciding which adorable goods to bring back home.