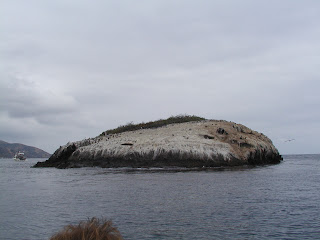 Bud Mauro and Susan Miller of Rodeo Realty’s Northridge office are listing agents for White Rock Island (aka Bird Rock), which is located approximately 1500 feet off of the mainland side of Catalina Island’s Isthmus Cove (Two Harbors).
The island consists of 1.3 acres that were acquired from the United States government in the late 1920’s. At one point there was talk about constructing a casino on the island, and then a yacht club. But none of those plans ever came to fruition.
T.V. director Michael Caffey is the island’s current owner. He inherited it from his father, who was the first private owner in the 1920s. Caffey, 80 years old, worked on hit shows such as “The Mod Squad” (1968-71), “Barnaby Jones” (1973-80) and “MacGyver” (1989-91).

Bird Rock has been used as the location for several movie settings and more recently as the subject of a TV production series hosted by Huell Howser, entitled “California’s Gold”, “A search for California’s rich history and natural wonders”. The waters surrounding the island are a marine paradise.

With proper building permits and approvals the Bird Rock may lend itself nicely to certain “easy on the environment” projects such as a yacht club, scuba dive school or other developments with water related activities. It’s under the jurisdiction of LA County.

The zoning is unclassified according to Los Angeles County planning. Due to the island’s proximity to other land masses, schools or other developments, the regular permit process of notifying property owners within a certain radius may not apply.

The nearest land is Catalina’s Two Harbors area, which is zoned MXD (Mixed – Use Development) and R–R (Resort & Recreational). For more information contact Bud Mauro or Susan Miller @ (818) 363.4997 or e-mail BudMauro1@aol.com or info@SusanMiller4Homes.com.