Congratulations to Joseph R. Haiek,  father of Alex and Caterina Haiek of Rodeo Realty’s Beverly Hills office! He was recently among 100 recipients of the Ellis Island Medal of Honor. He received the award at a ceremony in New York on May 7, 2011. 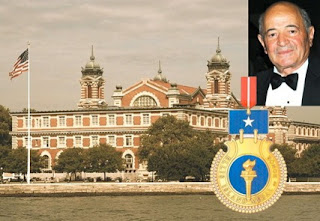 Sponsored by the National Ethnic Coalition of Organizations (NECO), the annual awards are “designed to pay homage to the immigrant experience, as well as individual achievements, of U.S. citizens from various ethnic backgrounds,” according to the NECO Web site.

“The honorees are remarkable Americans who exemplify outstanding qualities in both their personal and professional lives, while continuing to preserve the richness of their particular heritage,” said NECO. “We honor them because they create a better world for all of us in the future by the work they do today.”

The Almanac’s 6th edition, which is 608 pages, was published in late 2010. The main purpose of the series is to broaden the reach and availability of pertinent and accurate reference information about Arab Americans.

Alex and Caterina Haiek specialize in residential and commercial real estate consulting in Beverly Hills and the greater Los Angeles area. The brother and sister team is known as the Haiek Group. They can be reached at http://www.haiekgroup.com/ , Alex@RodeoRE.com, and Caterina@RodeoRE.com.