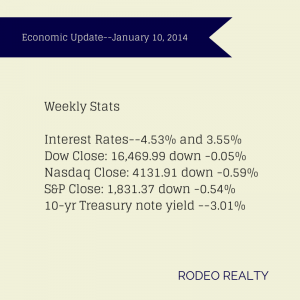 The labor market closed out 2013 by adding just 74,000 jobs in December, the lowest number of new jobs since January 2011. However, the unemployment rate fell from 7% to 6.7%, the lowest since October 2008, the Labor Department said, mostly due to a drop of 347,000 in the labor force — the number of Americans working or looking for work. Most economists feel that the low number was an outlier and not an indicator of the future of the job market. By contrast, ADP’s survey showed that businesses added 238,000 jobs in December, the most in 13 months and economists were predicting a jobs report closer to the 200,000 mark.  The Labor Department’s report showed businesses added 87,000 jobs while federal, state and local governments cut 13,000. Job gains for November were revised upward to 241,000 from 203,000. All told the economy gained an average of 182,000 jobs per month in 2013 essentially the same as in 2012 (2.18 million jobs in 2012, 2.19 million in 2012). Congress continues to debate an unemployment insurance bill that would extend emergency unemployment insurance for the 1.4 million Americans.

This disappointing job report caused rates to drop sharply throughout the day. By the end of the day rates dropped by about 1/8% in rate or 1% in loan fee! It was a shockingly low number that took everyone by surprise. The question now is: what does this do to the Federal Reserves announced drawing down of mortgage and bond buying stimulus program? The announced draw down has driven rates up.

Interest rates remained relatively flat this week as the Market waits the see how the Federal Reserve will move forward with the bond-buying program. Policy makers at the Fed including the newly-appointed Janet Yellen will meet later this month to set the pace for the bond-buying taper. The Freddie Mac Weekly Primary Mortgage Market Survey showed that the 30-year-fixed rate dropped slightly to 4.51% from 4.53% last week.  The 15-year-fixed rose to 3.56% from last week’s 3.55%. A year ago the 30-year fixed was at 3.40% and the 15-year was at 2.66%. Expect these rates to be lower when announced next week due to today’s drop. Jumbo and high balance conforming rates are about 3/8% higher than the Freddie Mac rate.

The new mortgage rules issued by the Consumer Financial Protection Bureau take effect today. The rules are designed to discourage predatory lending. Most lenders have already adopted these practices so there shouldn’t be too much difference however there will be increasing attention paid to a borrower’s debt-to-income ratio; it may become harder for people with higher debt loads to get approved for a new home if they cannot stay below the 43% debt-to-income ratio.

The latest Fannie Mae Monthly National Housing Survey for December shows that 49% of U.S. adults say home prices will rise throughout 2014, up from 43% in December 2012. The survey showed that 33% of homeowners say it’s a good time to sell, up from 21% a year ago. People also believe that home values will rise more this year: 3.2% in December compared to 2.6% in December 2012.
CoreLogic released data showing that U.S. home prices increased 0.1% in November, up 11.8%from a year ago but showing a slowing pace of increase. These figures aren’t adjusted for seasonal patterns.