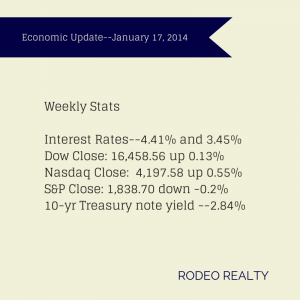 On the heels of last week’s low job creation numbers there is some positive employment news, The U.S. Department of Labor reported that the number of job openings in November hit 4 million, up more than 5% from a year before and the highest level since March 2008. The number of quits rose to 2.43 million, the most since September 2008, showing that many workers are seeing more prospects out there and are willing to change jobs.

The latest survey on consumer sentiment fell in January with a reading of 80.4 as compared to a reading of 82.5 in December, well below economists’ forecasts of an 84 reading. Survey respondents may have been reacting to the recent job numbers as well as a slight uptick in the average price of gasoline (up to an average of $3.296 per gallon compared to last month’s $3.216 per gallon).

The California Association of Realtors®  (C.A.R.) released numbers showing that California home sales fell for the fifth straight month in December partly because the distressed market plays a smaller role in the state’s housing market so there was less movement by lenders trying to move properties off their books by the end of the year.  Closed escrow sales of existing, single-family detached homes in California totaled a seasonally adjusted annualized rate of 361,890 units in December, down -6.7% from a revised 387,860 in November and down -18.6% from a revised 444,770 in December 2012. For 2013 as a whole, a preliminary 413,870 single-family homes closed escrow in California, –5.9% from a revised 2012 figure of 439,790.

The latest information from DataQuick shows that home sales across the six-county Southland area fell to a six-year-low for December while the median price paid for a home rose to the highest level in nearly six years. A total of 18,415 homes were sold in Los Angeles, Riverside, San Diego, Orange, Ventura, and San Bernandino counties last month. The number was up 6.5% from 17,283 sales in November and down -9.2% from 20,274 sales in December 2012. Last month’s sales were -24.1% lower than the average number of sales in the month of December. The median sales price for the Southland region was $395,000 last month 2.6% gain from November and 22.3% over December 2012. DataQuick attributes the numbers to investor activity decreasing as buyers faced a low inventory of homes with demand continuing to outstrip supply. The typical monthly mortgage payment Southland buyers committed themselves to paying last month was $1,594, up from $1,517 the month before and up from $1,139 a year earlier. Buyers paying cash in December accounted for 27.7% of home sales, down from 28.0% the month before and down from 35.8%  a year earlier. For Los Angeles County alone 7,198 homes were sold compared to 6,240 last December, a decrease of -13.30%. The median price in LA Country rose year over year from $352,000 to $430,000, a gain of 22.2%.

Realty Trac reported that foreclosure activity dropped by -26% in 2013 and  U.S. homes that got started on the path to foreclosure fell last year to a low not seen since before the housing boom. Foreclosure starts were down 33% from a year earlier and at the lowest annual level since 2006.

The National Association of Home Builders released their latest survey which shows builder confidence holding relatively steady.  The NAHB/Wells Fargo Housing Market Index was at 56 points in January from a downwardly revised 57 in December. The December reading originally reported at 58 was the highest level since August. Rising prices, low interest rates and continued demand continue to make home builders optimistic about the current market.

The Consumer Price Index increased 0.3% in December, the largest 1-month increase since June 2013 however much of that was due to energy prices. Year-over-year prices rose 1.5%, well under the Federal Reserve’s 2% inflation target.

very active. We are starting to see the beginning of another price surge!