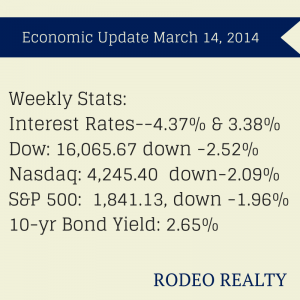 For the first time in nearly six years the Los Angeles County jobless rate is below 9%.The county unemployment rate for January was 8.9% the lowest level since November 2008 and a dip below December’s rate of 9.2%.  The state Employment Development Department also reported that the county lost nearly 63,000 jobs between December and January mostly due to post-holiday layoffs in retail. An annual revision resulted in 200,000 more jobs showing up on employer payrolls in the county than previously estimated. In the past 12 months, the county added 91,000 jobs a growth rate of 2.3% with the biggest gains coming in professional and business services, which were up 27,000 jobs, and health care/social assistance, which were up 19,000 jobs. The statewide unemployment rate for January was 8.1% still above the national rate for January of 6.6%. On a national level this week, the number of Americans filing new claims for unemployment benefits unexpectedly fell hitting the lowest level since November.

Stock markets were lower this week as concerns over  a slowdown in China and the tensions between Ukraine and Russia dominate the news. Russia continues to advance into the Crimea and has been threatening to enter other parts of Ukraine despite demands from the West to pull back. The Crimean Peninsula is holding a referendum this weekend on whether or not it should secede from Ukraine and join Russia. Also this week it was reported that U.S. wholesale prices fell for the first time in three months. Consumer sentiment as measured by the University of Michigan and Thomson Reuters  index dropped to 79.9 this month down from a February final level of 81.6. Rising gas prices and larger geopolitical worries are believed to have played a major role. The Dow fell this week to 16,065.67 down -2.52% from last week’s close of 16,452.72. The Nasdaq  was also down this week closing at 4,245.40  down-2.09% from last week’s close of 4,336.22. The S&P 500 ended the week at 1,841.13, down -1.96% from last week’s 1,878.04 close. Markets in Europe and Asia showed much larger drops, average drops were about 5% for the week.

The 10 year treasury note yield rate fell to 2.65% after closing at 2.80% last week. Most of this drop in yield took effect on Thursday and Friday. This has caused mortgage loan interest rates to drop in the last couple of days!

Have a nice weekend!