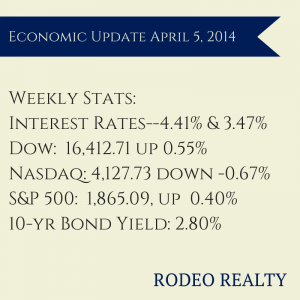 The March Bureau of Labor Statistics jobs report was released Friday. It showed that the economy added 192,000 non farm jobs. This was welcome news after 3 months of much lower than expected gains, which were attributed to poor weather by many. January and February numbers were revised upward as well. The gains were all in the private sector, as government jobs showed no increase. The sectors with biggest job gains were: Professional and Business services, 57,000. Health care, 19,000. And Construction, 19,000. Construction has added 151,000 jobs over the last year. The March national unemployment rate held steady at 6.7%, the same rate it was at in February, however it did show that job creation is continuing at a steady pace. The labor force participation rate, or the proportion of working-age Americans who have a job or are looking for one rose to a six-month high of 63.2 % from 63%  in February. This signals more people looking for work that had taken themselves out of the work force, as they are more optimistic about finding jobs than in the past.

The 10 year treasury bond yield ended the week at 2.80%. It was 2.73% last Friday and 1.78% a year ago. This signals an upward trend for Mortgage interest rates which closely follow the treasury bond market. Rates actually fell in January have been very steady since. This was mostly due to the disappointing December and January job numbers. With February and March numbers back in line with expectations, expect rates to continue to rise as they have in the last week.

U.S. construction spending showed a slight increase in February, up 0.1%  in February after a 0.2% drop in January. The Commerce Department reported that construction stands at a seasonally adjusted annual rate of $945.7 billion, 8.7% above the level of a year ago. Residential construction dropped 0.8%, the biggest setback since July. This is believed to be a temporary drop.

CoreLogic reported home prices rose 0.8% month over month from January and 12.2%compared to February 2013. This represents 24 months of consecutive year-over-year price increases. CoreLogic’s month-to-month prices aren’t adjusted for seasonal patterns. California was one of the five states with the highest home appreciation at 19.8%. CoreLogic predicts a10.5% year-over-year increase for March.

Zillow released a report this week showing that only around 43% of homes on the market in the Los Angeles area are affordable by  historic standards, meaning that a family could buy the home and  spend 35% or less of their household income. This is the number that was the average from 1985 through 2000 before the housing bubble. Today the average family would need to spend 39% of its income on a mortgage which is the highest rate of anywhere in the country.

All in all the Real Estate market seems to be in the mist of a spring pick up. Our closed escrows were up about 20% from February as the selling season has picked up steam. Some areas are beginning to see more listings, but most of our market suffers from very low inventory. We really need to see inventory levels increase before prices can level! With property and income tax due over the next two weeks it is possible we could see things cool off a little for a few weeks. It’s pretty common this time of year. If that should happen, don’t panic! It will roar back by the end of April!