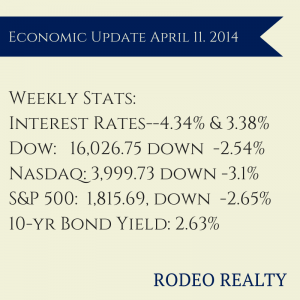 This week marked good news on the jobs front. The Labor Department reported that U.S. job openings in February reached their highest level in six years, increasing 299,000 to a seasonally adjusted 4.17 million. The report is one of the indicators being watched by the Fed as they continue to assess the health of the U.S. economy. Another indicator is that the number of people quitting their jobs also rose for the first time in months. This generally indicates confidence in the fact that jobs are more plentiful.

Early consumer sentiment indicators for April are strong. The consumer sentiment gauge from the University of Michigan and Thomson Reuters rose to a preliminary April reading of 82.6 — the highest reading since July — from a final March level of 80.

The Labor Department reported that U.S. wholesale prices rose a seasonally adjusted 0.5% in March. The price of wholesale services jumped 0.7% last month, while the cost of goods were flat. Personal consumption rose 0.6% in March.

It was a rough week in the stock market as numbers continued to fall and many of the once high-flying stocks such as Tesla and Facebook have taken big hits. These stocks, it should be noted, have seen tremendous run ups, and have been trading at outrageous price to earnings ratios. They are” sexy stocks” which often sell at numbers that don’t make financial sense. U.S. stock numbers have also led to a greater instability in markets overseas. The Wall Street Journal reported that hedge funds have also been cutting their overall exposure to stocks in recent weeks. The Dow fell this week to 16,026.75 down  -2.54% from last week’s close of 16,412.71. The Nasdaq closed below 4,000. It dropped to 3,999.73 down -3.1% from last week’s close of 4,127.73 led by a plunge in biotech and high-growth stocks. This was the biggest weekly percentage drop in the Nasdaq since June 2012 and Thursday saw the biggest percentage point drop since August 2011.  The S&P 500 also was lower, ending the week at 1,815.69, down  -2.65% from last week’s 1,865.09.

On a very positive note we are seeing an easing in qualifying standards by lenders. When the Qualified Residential Mortgage standards came into effect under the Dodd Frank Financial Reform at the beginning of the year many people feared that loans would be harder to obtain. Today just 4 months later many lenders have made their guidelines more lenient than we have seen since the collapse of sub prime. Some examples are: More lenders offering stated income. Jumbo loans up to $4,000,000 with only 20% down! Some lenders are offering back end ratios of up to 49% on jumbo loans. People with short sales are able to obtain loans after 2 years with some lenders rater than 4 years.This is all good news after 6 years of very stringent lending standards!

The latest National Housing Survey from Fannie Mae shows positive movement. The March survey showed that despite some recent volatility, consumers are feeling positive about the housing market. The share of the March survey respondents who say it is a good time to sell a home jumped four percentage points from February’s level to 38%, up from 26% in March 2013.  Those who thought it was a good time to buy increased one point to 68, two points below responses one year earlier. Although most respondents (54%) felt mortgage rates would increase over the next year, those respondents (52%) felt they could easily get a mortgage.  Those who expect prices to continue to increase over the next 12 months went from 52% in February to 48% while the amount of those expecting prices to stay the same increased by four points to 42%. Survey respondents generally seemed more positive about their financial situation. The amount of those who expect their financial situation to worse dropped to 12% from 21% a year ago and those who say their personal financial situation has improved over the past year is 40%, an all-time survey high. However 58% of respondents feel that the economy is on the wrong track, the same number that felt that way one year ago. Overall 68% of participants said they would buy if they were going to move.

An index from FNC forecasts a 3.7% rise in home prices between March and August for Los Angeles and Orange Counties this year. The home price index is based on non-distressed sales. The index in February was 17.4% higher than last year in Los Angeles and Orange Counties.  FNC forecasts that the index will keep rising throughout the summer at roughly half the pace that it did last year.  According to the director of research at FNC, this is a sign that the market is healthy but not overheating. Homes on average sold in March went for just a little below their list price and the average seller sold their house for 4.5% more than they paid for it.

The only drags on the economy this week were that property tax taxes were due yesterday, and income taxes are due Tuesday. Income tax rates are higher this year as the Bush Tax Cuts have expired for taxpayers with family incomes over  $400,000. Special accelerated depreciation amounts have also expired from the Obama Stimulus Package, and the payroll tax “holiday”  also expired this year. This has left everyone with higher tax rates. Fortunately, the economy is expanding. Consumer confidence is up, as are incomes!

All in all we are very fortunate to be in such a vibrant Real Estate Market! Financing is getting easier to obtain, prices are rising, buyers are motivated to buy, and the number of homes sold is increasing!