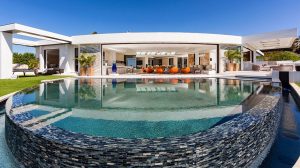 Beverly Hills recorded the highest-priced sale in its history Thursday at $70 million for an 8-bedroom, 15-bath home in Trousdale Estates. Congratulations go to Branden Williams and his wife-and-partner Rayni at Hilton & Hyland. The buyer was represented by Sally Forster Jones, president of Aaroe International Luxury Properties and Katia De Los Reyes of John Aaroe Group.

The just-completed, wrap-around, steel-and-glass, home represents every modern amenity including the exceptional hi-tech appointments that make a home. For Persson, who programmed his father’s home computer at the age of seven and created his first game at eight, this property must be a dream.

John Aaroe said, “I have been in this market for over 30 years and have never seen the level of growth that the luxury market has experienced in the past year, with no end in sight.”

“This was a great product and it’s in the best City in the world, Beverly Hills,” said Branden Williams. “Cool architecture with a 360-degree view of all of downtown and the ocean . . . “

Williams said the product was so good it practically sold itself.

“People come to Beverly Hills and they would like to see something magnificent,” he said. This house is magnificent. According to his standards, Williams says that the indoor-outdoor feel, the stainless steel-frame, glass and hi-tech appointments are what his overseas clients imagine in Beverly Hills. They are looking for the high-end top-of-the food chain architecture personified by this Trousdale home.

This home was unique. In addition to all the architectural features, the 90210-zip code and the Trousdale location, this one has the 360-degree view, which cannot be beat.

“This house was 23,000 square feet with beautiful views, bedrooms and amenities. There is not a lot of inventory like that,” said Williams.

Just completed, the residence’s architect was Bruce Makowsky, he of the famed handbag line sold on QVC.

Located at 1181 Hillcrest Drive, the house is certainly in a good neighborhood. Area residents include Jennifer Anniston, Ringo Star and when he was alive, Elvis, said Williams.

Among the legendary features toilets (15) at $5,600 each; an 18-seat screening room with lizard-skin walls, a wall of onyx, iPad controlled fountains and a 54-foot curved-glass wall that slides open to an infinity pool that drops off into the L.A. Basin. Williams calls the mirrored subterranean garage a “garage-majal.” One room features a wall made of every kind of candy in dispensers floor-to-ceiling, a sweet way to charm one’s guests.

Peerson has a twit-pic making the internet rounds of someone’s feet, presumably his, resting on the divan in what appears to be the house.

“He’s a really sweet guy,” said Forster. She confirmed that all the furniture is one-of-a-kind, custom-built for the house, including the “Bentley chairs” for the living room.

“The house just has a lot of ‘wow’ factors.”

Makowsky took a risk, and it paid off. The property was bought just prior to the real estate spike, at $12.8 million and developed on spec. It is now worth between $3-4,000 a square foot.

What a gamble. “That’s the highest price per square foot, not only in California, but in the entire country,” said Williams.

The $70 million sale was listed by Ben Bacal of Rodeo Realty. Bacal sold the property to Bruce Makowsky during the market downturn for $12.8 million, but was convinced, he said, that the property was worth more. He represented both the buyer and the seller at the time.

“Now the lot alone would be worth $37 million,” said Bacal. I predicted that it was going to be worth a lot more.”

“Makowsky has a vision to create the ultimate turn-key mega mansions for the 4,000 or so billionaires in the world who want the best contemporary view properties in Los Angeles.” Bacal says that these properties are undervalued compared to comparable  properties elsewhere in the world, a view shared by many.

“This is the last promontory view property to buy in Trousdale,” he pointed out. That is what made it so valuable. “There aren’t that many. There’s not a lot of great land left anywhere in the Golden Triangle. It is significantly undervalued to live in the most incredible place in the world.” He sees values rising to $4-5-6,000 per square foot among those lots.

Makowsky has big plans, said Ben. Currently he is developing three more properties, including two in Beverly Hills at 80,000 and 70,000 square feet each. The third is in Bel Air and is 40,000 square feet. “These will top $150 million,” he said.

“He personally finances all of his developments,” said Bacal, who expects to list these properties with Ben Bacal.

When the home was purchased, the Minecraft creator also purchased all of the furniture for $6 million.