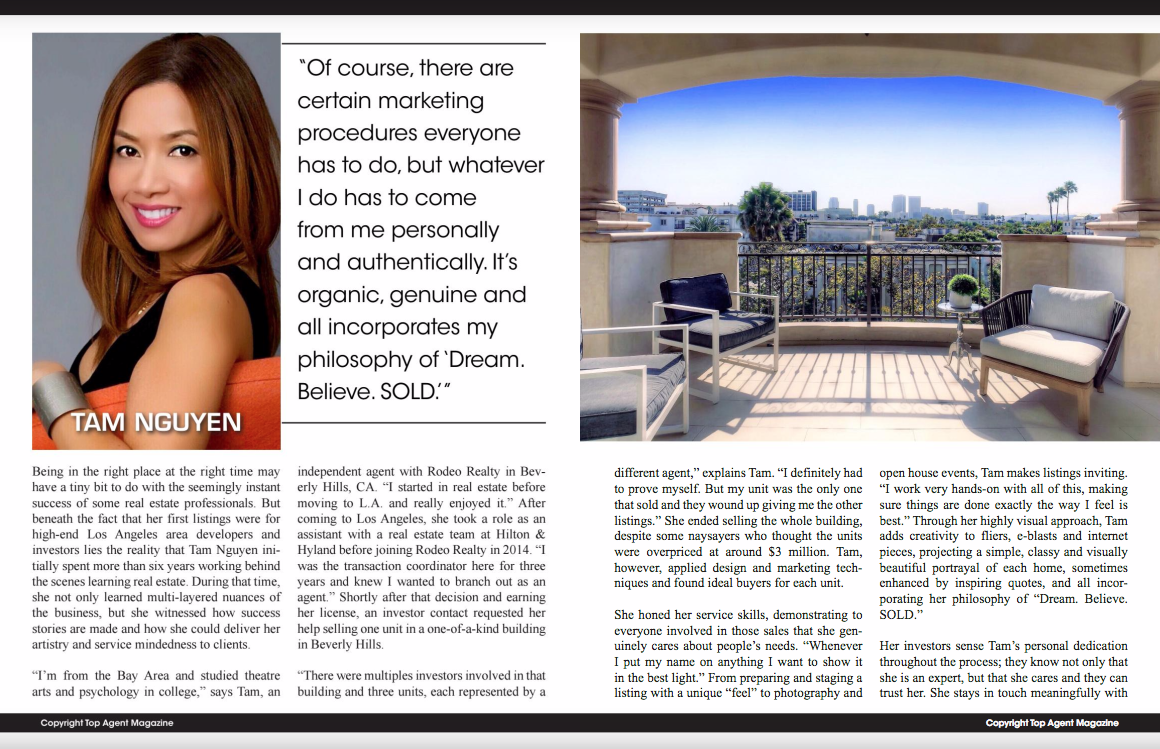 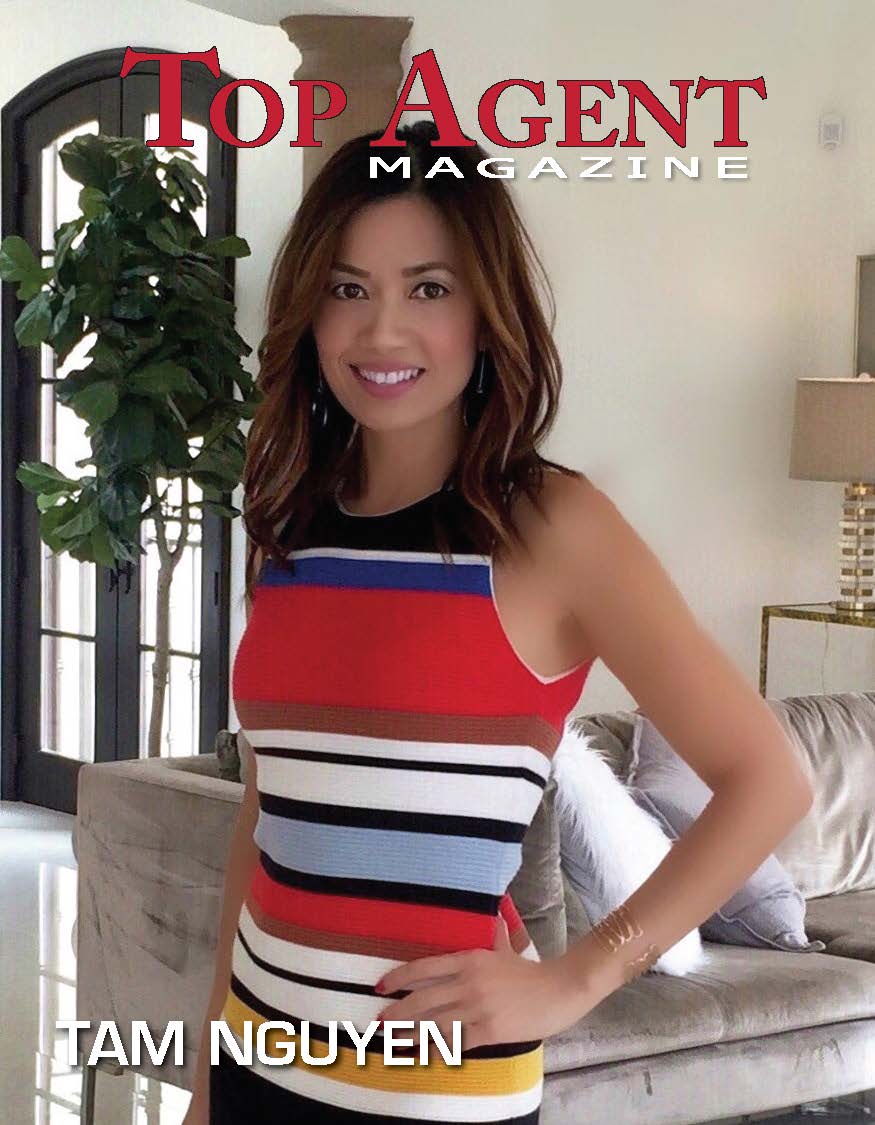 To be considered for a feature in Top Agent Magazine all professionals must go through a nomination and interview process. ALL Candidates are then evaluated based upon production, professionalism, as well as industry and community involvement.

“Tam Nguyen is a stellar example of the kind of prominent leaders of real estate we are proud to feature in Top Agent Magazine,” said the company.

Aside from the six page article, Tam is also on the cover of this month’s magazine. 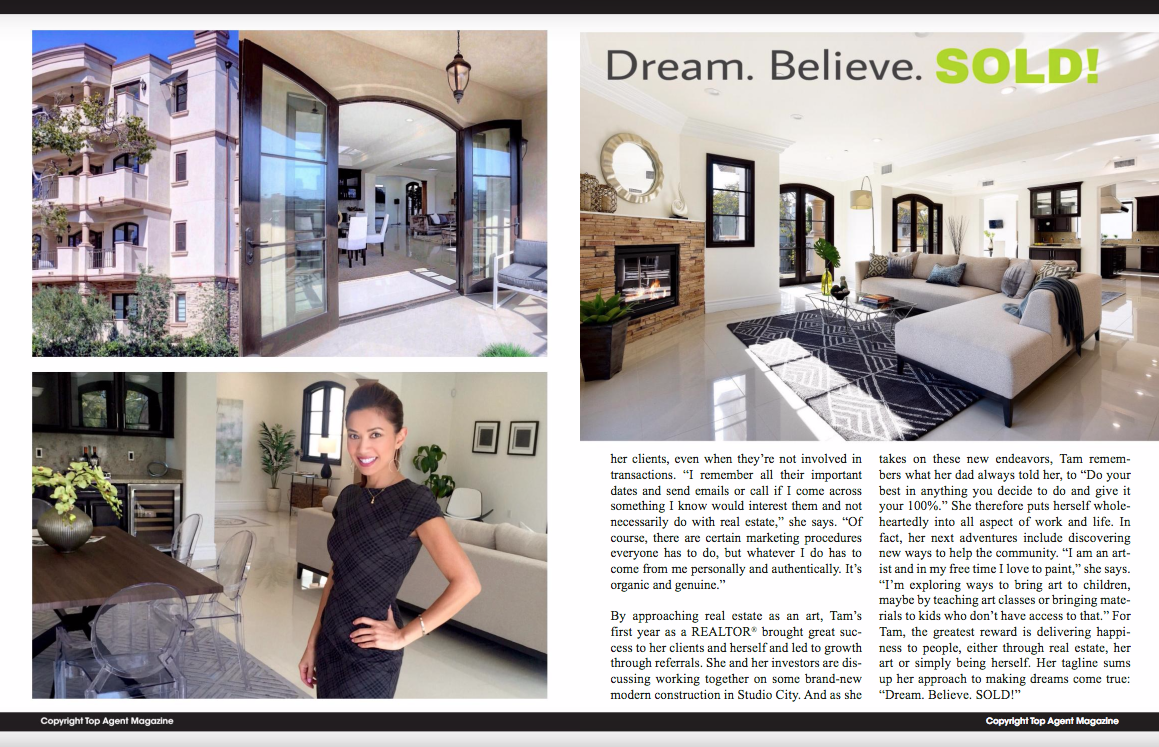 “Of course, there are certain marketing procedures everyone has to do, but whatever I do has to come from me personally and authentically” said Tam in the feature. “It’s organic,  genuine and incorporate my philosophy of ‘Dream, Believe, SOLD’.”

To read the entire article on Tam, click HERE. 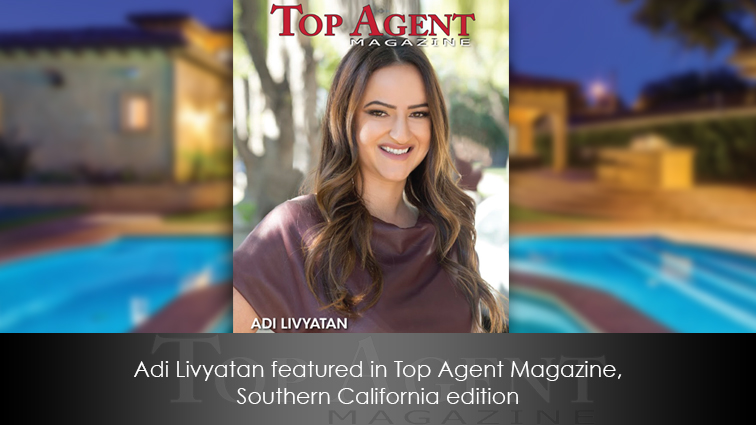 The agent is not only featured in a six-page spread, but she’s also on the cover of the publication.

The magazine starts off by talking about how Adi began her career in real estate.

“My husband and I started flipping houses six years ago and in order to save us some money, I got my license.,” said Adi to Top Agent Magazine. “I quickly discovered that I loved it and was starting to get approached by people to list their homes. I knew I wanted to do this full time. It quickly became an addiction, I just fell in love with every aspect of the business.”

According to the magazine, in just six years, Adi has become the number one agent in the Rodeo Realty Sherman Oaks office. Her business has been growing so rapidly that she is looking to expand her team.

“I work very hard, I always pick up my phone and I’m always there to help,” said Adi. “I care tremendously about my clients. I would never tell them to buy a house I wouldn’t buy, and that’s why they have a lot of trust in me. It’s not about the money for me, I like to sleep at night and I can, knowing I always do the right thing for my clients.” 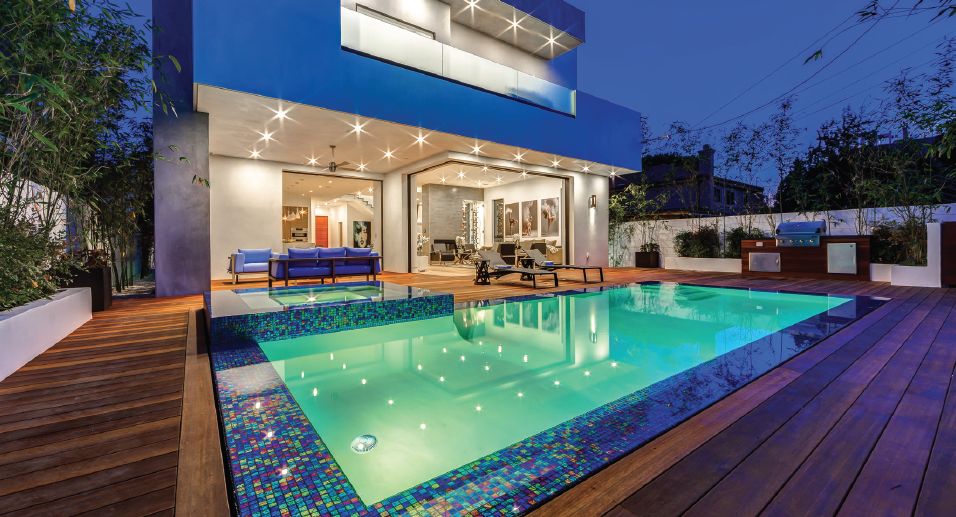 The magazine also talks about Adi’s comprehensive approach to marketing and how she specializes in new construction. The real estate agent is also a mom to three children and is an active supporter of her kids’ schools and involved in various organizations.

To read the entire article on Adi, view below. 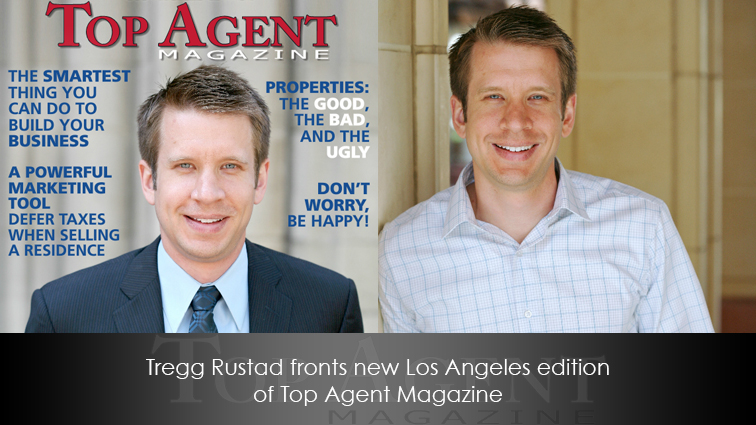 The new Los Angeles issue of Top Agent Magazine is out this week with Rodeo Realty’s Tregg Rustad as the cover Realtor.

The Beverly Hills agent fronts the publication and is featured within, with stories about his very first sell, his real estate team, and his life.

“The most interesting part of Tregg Rustad’s work is putting the pieces of a real estate transaction together,” said Top Agent Magazine. Rustad’s attitude and expertise have earned him and his partner, Peter Maurice, a ranking as Rodeo Realty’s top team, states the article.

“Year after year, the Wall Street Journal and Real Trends rank them as one of the Top 12 real estate teams in the Greater Los Angeles area…and one of the Top 250 teams in America, out of 1.1. million Realtors® nationwide,” said Top Agent.

According to the feature, in the 15 years that Rustad and Maurice have been working together, they’ve closed 1,300 transactions, representing almost $1.3 billion.

Before becoming a real estate agent, Rustad worked in film production. He tells the magazine that he wanted something different, so he got his real estate license between movie productions and sold his first property to a writer on one of the shows.

“I started selling real estate at 22 years old with a network of zero,” Rustad tells Top Agent. “Part of the benefit of starting young as I did is that I was open-minded about who I worked with. No deal was too small. For example, I sold a one-bedroom condo to a client in 2002 and have done five transactions for him since, as well as six or seven for his friends and family. Word of mouth is the best way for me, because people come with trust.”

In the article, Rustad also talks about his real estate partner, Maurice—who was a studio lawyer for 10 years before he got into real estate.

“We built our practice with the same dedication to excellence and client satisfaction that you should expect from your attorney,” said Rustad.

During his spare time, Rustad tells the publication that he enjoys relaxing with his wife and daughter, and also loves to surf, hike, and go camping. He also likes to buy and remodel property—which he says gives him real world experience he can share with his clients.

The article closes off by stating that it’s important to Rustad to be efficient and professional from the first phone call to the close of the transaction.

“My first 10 years were about learning,” said Rustad. “Now halfway through my second 10, it’s about perfecting and expanding. My last 20 will be about having the business where I want it to be and enjoying the benefits.”

To read the entire feature on Tregg Rustad, click HERE. 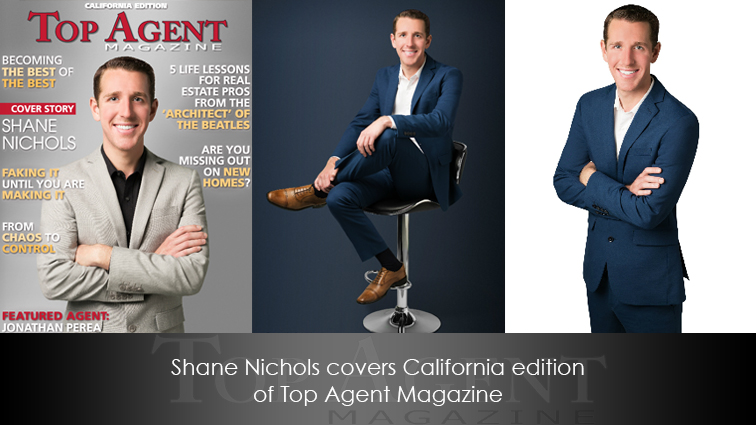 Nichols is covering the front of the magazine and is also highlighted throughout the publication.

In a 6-page spread, the premier real estate magazine gives an in-depth look at Nichols career and his success.

“With a natural ability to sell and a strong drive to achieve goals, Shane Nichols has set himself apart in the southern California Real Estate market,” said Top Agent Magazine.

The magazine mentions Nichols previous career in sales and how that led him to become a Realtor®.

“The year 2015 was his first full-time year in the business, and he was recognized at Rodeo’s yearly awards ceremony as one of the Top Producers of a company with 11 locations and over 1,200 agents,” said Top Agent. “That’s impressive.”

To demonstrate how the real estate agent goes above and beyond his client’s expectations the magazine also published two of Nichols’ Zillow reviews.

“…We interviewed 4 different agents, Shane was first,” said one recent seller. “After we had interviewed everyone, we came to the conclusion we definitely wanted Shane to sell our home.”

The review ended by saying, “When all is said and done, we couldn’t be happier with everything he did for us. We gained a great Realtor® and lifetime friend.”

The article closes off by stating that Nichols passion for the real estate industry stems from the people he gets to help.

“I’m in a service profession for a reason: I enjoy helping people,” said Nichols. “And finding them that home of their dreams is a pivotal part of what I do and why I enjoy it.”

To read the entire feature on Shane Nichols, click HERE. 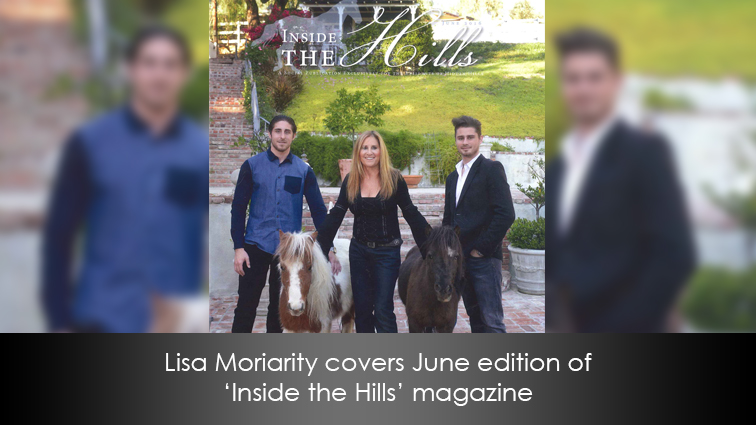 Rodeo Realty’s Lisa Moriarity and her two sons are covering June’s edition of Inside the Hills. The Calabasas agent is featured on the front cover and throughout the publication, which focuses exclusively on the residents of Hidden Hills.

In the section titled ‘Meet your neighbors,’ the magazine talks about Moriarity and how she has built her twenty-five plus years successfully selling residential real estate with a refreshing straightforward approach.

“With her honesty she has been able to establish the trust with her clients time and again, and has been able to assist them in finding the perfect home for their families,” said Inside the Hills.

The magazine also mentions how Moriarity ‘s career started in real estate—how she represented some of the largest builders in southern California and how she transitioned to representing families seeking to purchase or sell homes throughout the Hidden Hills and the greater Calabasas area. 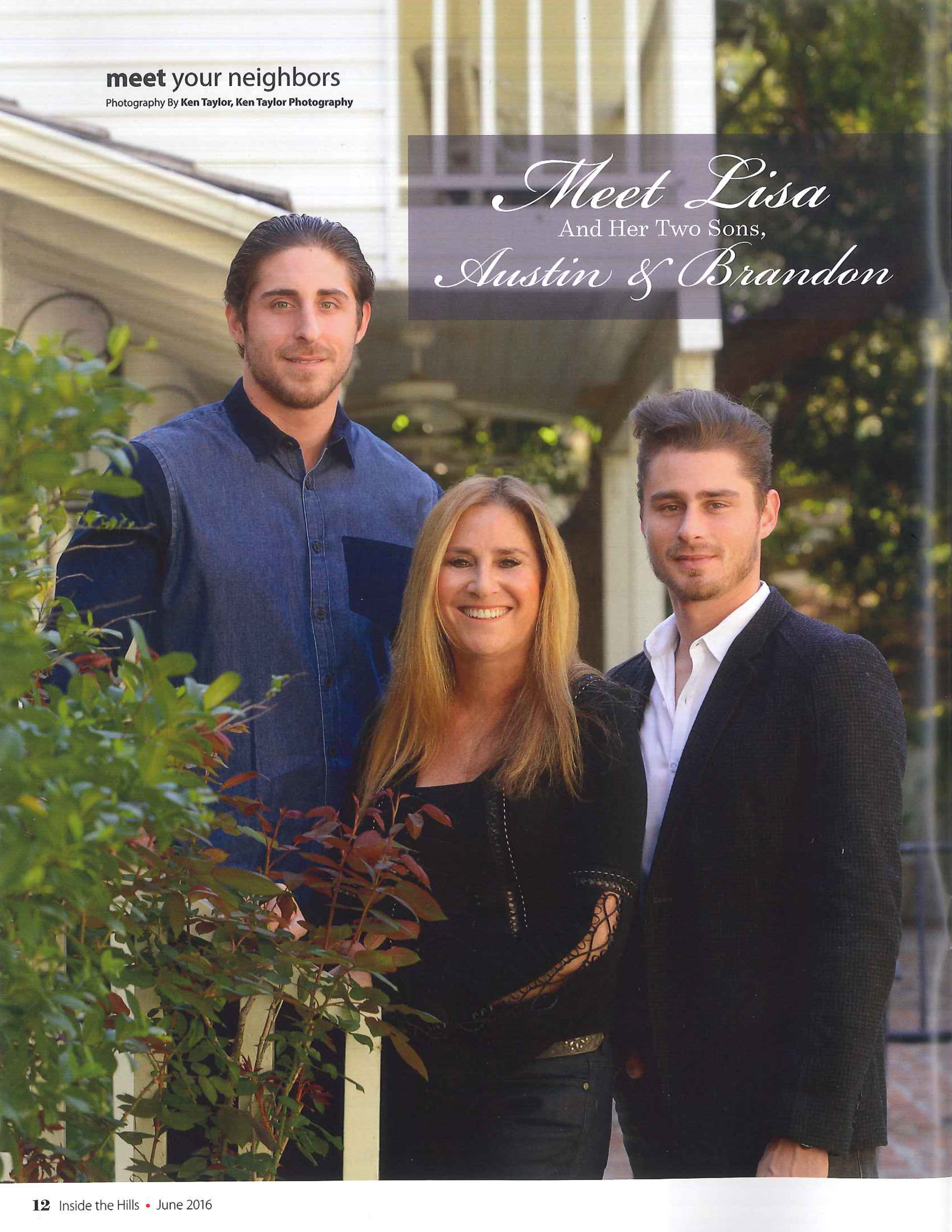 Moriarity’s two sons, Brandon and Austin, are also featured inside the magazine. Her first son Brandon, 27, has started his successful career in commercial real estate. Her second son Austin, 25, is currently pursuing a career in merchant services.

In a Q&A, Moriarity tells the magazine that developing new relationships through her job is the biggest reward.

“Because we work so closely towards a mutual goal, by the close of escrow I’ve made new friends that I will have for years to come,” said Moriarity.

The real estate agent also answers questions about her involvement in the community, her favorite areas, and the activities she enjoys. She also spoke about her love for animals and how she owns two horses, two goats, four chickens and one cat, which are also featured inside the publication.

“Being able to have these animals was one of the biggest reasons I came to Hidden Hills and has kept me here,” said Moriarity.

View the article below to read more on the feature: