Todd Jones of Rodeo Realty’s Studio City office recently got his first byline in a local newspaper, The Studio City – Sherman Oaks – Encino NEWS! The whole story he wrote is below. (Note: I tried to link Facebook directly to the article, but it gave me problems -hence the cut and paste job.) To view the newspaper’s original, visit:
http://shermanoaksstudiocitynews.com/archives/2011/Jan_2011_ShermanOaksStudioCity_Encino_news.pdf
Very cool stuff!

Rio Vista’s Fifth Grade Music Students Experience Glee
By Todd Jones
Rio Vista Elementary’s fifth grade guitar students got a special treat in December with a very unique field trip. It wasn’t to a museum, or an aquarium, or the science center, they took a trip to Paramount Studios where they interacted and performed with the cast of the hit TV show “Glee.” 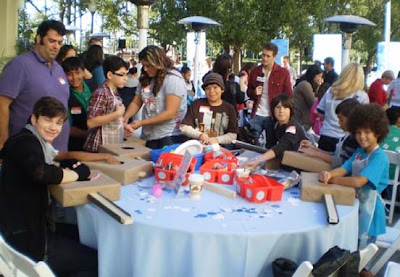 Rio Vista Elementary was the happy recipient of a guitar and recorder class provided by a non-profit called Education Through Music-Los Angeles (ETMLA). Every week this non-profit teaches children in select schools the basics of music. Their mission is that each student “deserves a well-rounded education…one that includes music.”

All the teachers and instruments are provided by ETMLA at no cost to the school and their presence fills a growing void in the ever shrinking budget of the LAUSD. The field trip was hosted by Members Project® from American Express and FOX’s “Glee” cast. The students made toy guitars, shakers, and tambourines with cast members Matthew Morrison (Mr. Schuester), Mark Salling (Puck), Jenna Ushkowitz (Tina Chang), Chris Colfer (Kurt Hummel), Cory Monteith (Finn Hudson), Harry Shum, Jr.,

After making crafts, the “Glee” cast members became the audience as the fifth graders rocked out with Journey’s “Don’t Stop Believin’.” In true “Glee” style, they had a choreographed routine where the guitar students were sitting on desks while the other students sang. One student even stood on a desk for a little electric guitar solo.

The “Glee” cast enjoyed their role as an audience rather than the usual one as performer; and the fifth graders certainly seemed to have a good time. The finale didn’t belong to the fifth graders, however, but rather to American Express and the Fox/”Glee” team who presented ETMLA with a $100,000 check to further their mission of bringing music to students in under-funded schools, so that children’s lives will continue to be enriched by music. It was truly a day to remember for students and actors alike.

Todd Jones is a local Realtor and father of two boys at Rio Vista Elementary, which is located in Studio City and serves the children of Studio City, Toluca Lake, and North Hollywood.