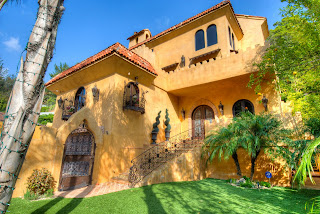 The actor is well known for playing Professor Charlie Eppes in the television series “Numb3rs.”

In addition to his work on Numb3rs, Krumholtz appeared as Goldstein in the films “Harold & Kumar Go to White Castle” and its sequel “Harold & Kumar Escape from Guantanamo Bay.”

A few of his other credits include playing Bernard in “The Santa Clause” and acting in motion pictures such as “Slums of Beverly Hills,” and “I Love You, Man.”

The estate is gated from the street and well equipped for entertaining, with indoor and outdoor entertaining spaces, outdoor spa and plenty of parking. The home is priced at $2,175,000. Allyson Carter is doing an open house this Sunday (Feb. 20) from 1pm to 4pm. The property web site is http://www.8054fareholm.com/