Skip to content
Pat “Pasquale” Losurdo and his high high school buddies loved the music of “Happy Days” and “Sha Na Na.” They were also big fans of the coming of age movie classic “American Graffiti.” Losurdo is an agent with Rodeo Realty’s Northridge office.
So in the early 1970s they formed a band to pay tribute to all of the great music of Motown, the 1950s and the 1960s. Nearly four decades later “Captain Cardiac and the Coronaries” is still going strong. And Losurdo says music and real estate are the perfect combination.

“Real estate and rock-n-roll go together hand-in-hand,” said Losurdo. “Juggling the time commitments of both is not a problem. And I always get leads and do a lot of networking when we do shows.”

The six member band, all of whom attended Monroe High School in North Hills, is made up of Losurdo, two guys who work with Raytheon, a small business owner, a retiree and one member who works at Amgen. 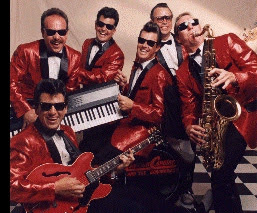 They’ve carved a successful niche playing at corporate events, festivals, parties and on cruise ships. Captain Cardiac and the Coronaries even recently played a gig to celebrate the new president of Southland Regional Association of Realtors.

Captain Cardiac and the Coronaries is also playing The Canyon in Agoura Hills on Friday March 4, 2011 – Doors 6pm. Show 9:30pm.