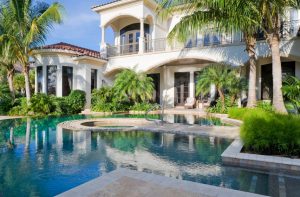 Real estate news for the month of June centered around higher interest rates after the  Federal Reserve Chairman, Ben Bernanke,  announced that the Fed would be slowing down the mortgage-and-bond buying purchases under the program known as QE3 by the end of the year. He further stated that the Fed planned to end all purchases as early as mid-2015. The reason for this announcement was because the Fed now felt that the economy was growing at a strong pace, unemployment levels have dropped and he expected them to continue to drop, so further stimulus would no longer be needed. This program helped bring rates to the lowest level seen in decades.

Mortgage interest rates were up sharply for the month. A 30-year-fixed conforming mortgage is now at 4.38% up from 4.24% last week and climbing steadily from 3.75% a month ago. The rate was 3.57% on May 1, so rates are up almost a full percent in 60 days.  A 15-year-fixed mortgage rate is now up to 3.46% up from 3.31% last week and up over half a point from 2.90% last month. Rates on high balance conforming $417,000 – $625,500 ( LA and Orange county and $598,000 for Ventura county) are about 1/8% higher than conforming and jumbo loans are about ½% higher. This week Federal Reserve officials continued efforts to curb a rise in long-term interest rates, hoping to calm fears raised by comments made by Chairman Ben Bernanke that triggered turmoil in global financial markets. Officials say an increase in the Fed’s benchmark interest rate is still a way off and bond purchases could also be prolonged if the economic performance doesn’t measure up to forecasts.

Reports on home prices continue to beat expectations. The California Association of Realtors reported that the median housing price in California increased 31.9% in May, the largest year-over-year increase in 33 years. Inventory levels remain low while the number of sales in May continue to rise. In May, there was a 2.6 month supply listings at the current sales rate, down from 3.6 % a year ago. A six-to-seven-month inventory represents a balanced market.  DataQuick reported that an estimated 42,293 new and resale houses and condos sold statewide last month. That was up 8.3 % from 39,051 in April, and up 1.2 %  from 41,790 sales in May 2012. The sales count was the second highest May ever reported behind only May 2006, where 54,099 homes were sold. We are seeing the strong market continue to get stronger and it seems rising interest rates are making a red hot market even hotter as buyers rush to make deals before interest rates get too high.

In May U.S. employers added 175,000 jobs, a slight improvement over April with the unemployment rate at 7.6%. The state’s employers added 10,800 employees to their payrolls in May, according to figures from the state Employment Development Department. Nearly all industries added workers, led by the leisure and hospitality sector, which added 9,000 jobs, mainly at hotels and restaurants. The California jobless rate plunged to 8.6% in May, down from 9% in April. Reports for June will be out on July 5, but are expected to show further gains in employment.

In other economic news, The Consumer sentiment Reuters / University of Michigan index showed consumer confidence at a 6 year high. Consumer spending was also up. Inflation remained at very low.  Gold, commodities and oil prices all continued to fall on the news that inflation remains in check. Gold, a popular safe spot for investors continues to fall dipping to under $1200 this week, a continued slide for the precious metal which hit a $1,895 an ounce in 2011. It was thought that the Fed’s stimulus programs would add so much money to the money supply that inflation would spike. Gold was sold as a “hedge” against inflation. Unfortunately, for gold buyers, that inflation has not materialized.