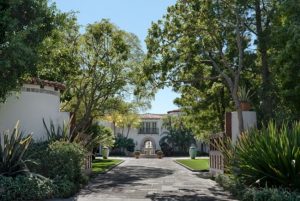 Rodeo Realty agents Joe Babajian and Judy Cycon  have sold one of the most distinctive properties in Beverly Hills as reported by the Los Angeles Times. The  landmark Spanish Colonial Revival estate originally built in 1927 by architect Harry E. Werner.  The eight-bedroom home was later owned by the actor James Coburn and also by a relative of the Sultan of Brunei.  It underwent a painstaking restoration and remodel by the legendary architects/designers Tim Morrison and Tom Proctor.  The rare combination of this prime location, the architectural integrity, the immense flat pad and the remarkable views make this one of the most distinctive properties in Beverly Hills.  It sold for $27.5 million.