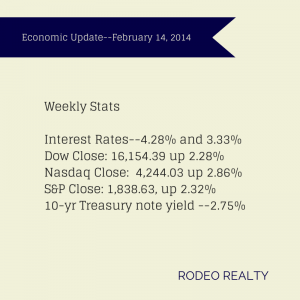 Credit reporting agency TransUnion released a report showing that the amount of late payments on home loans has hit the lowest level in more than 5 years. Nationwide, 3.85% of mortgage holders were at least two months behind on their payments in the October-December quarter, compared to 5.08% a year before.

There was an article this week in the L.A. Times about home prices stalling. A broker was quoted in the Inland Empire. That is not what is happening here! I doubt it’s happening there either. We definitely need more homes on the market as we are seeing record sales prices! We all should have bought more Real Estate in the last few years. Let’s not be saying the same thing at years end!