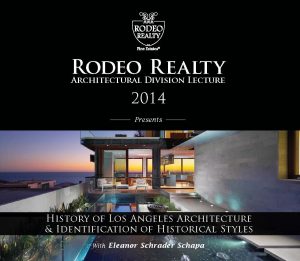 Recently noted architectural lecturer Eleanor Schrader Schapa met with Rodeo Realty agents for an inspiring morning full of architectural history and information. While naysayers in other areas may say that Los Angeles lacks culture, the opposite is true especially when it comes to great architecture. The architecture of Los Angeles reflect the city’s role as home to many different cultures. There are two main periods that influence much of architectural style in the area. The first is of course the mission period. Missions were established in Southern California partly to keep others, including Russian fur traders, from making a land grab. The oldest standing house in Los Angeles is the Avila Adobe, built in 1818 and now open as a museum. The classic adobe walls are several feet thick. In 1850 Phineas Banning established the Port of Los Angeles. Like many new arrivals he brought the styles from the East Coast with him. His home, in Wilmington, California, is also now a museum and reflects the Greek Revival style that was popular at the time.

Los Angeles has attracted many different styles of buildings. Although there are some excellent examples of Victorian and Italianate architecture throughout the city, the style doesn’t quite reflect how people in this area prefer to live, in larger open rooms with plenty of light and space. The restrictive nature of Victorian homes and the ornate syle of Beaux Arts led to the response that was the arts and Crafts movement. Arts and Crafts was a return to simplicity, to styles that were considered to be more organic and of the earth. Famed furniture maker Gustave Stickley espoused this view in his magazine, The Craftsman. Sears took the idea of Stickley’s floor plans and designs and sold a variety of kits that contained everything necessary to build the home of your dreams.

The Art Deco period was also a time of the flowering of Los Angeles as the movie industry moved from New Jersey to Los Angeles. This time period saw a variety of styles, in particular the Spanish Revival with red tile roofs and thick adobe walls. Schapa pointed out two very interesting features about these homes. The first is that those red tiles that are often on the roofs of these homes actually get their curved shapes from clay being shaped over the workers’ thighs. The second is that the particularly pointed yet wide arch seen in many of these homes including the Adamson House, is actually not a Gothic arch but is instead a donkey arch, named for a type of arch popular in Mexican architecture that gets its name from the room needed to pass a rider and donkey laden with packages through it.

Although we have a variety of styles here, from the cutesy charms of  English Tudor, French Normandy and Storybook homes to the sleek lines of Streamline Moderne and International style, Southern California is probably most famous for its mid-century moderns. The Case Study homes including the Eames house and the Schulman-photographed Stahl house represented the start of something amazing, a new view of home architecture for the post-war era.  These angular beauties, with their minimalist lines and ample use of glass usher in the era of the Los Angeles lifestyle. Schapa touched upon the popularity of the ranch home as seen at the time both on television and in the pages of Sunset magazine. It was the age of the martini, the wide-bodied American car, the swimming pool, and the nuclear family.

Los Angeles uniquely seems to embrace all styles. As with food, culture, art, and more, we seem to have room enough for all of it. It’s a major part of what makes this such a fascinating place to live and work. Schapa’s lecture reminded all agents not just of the beauty of the homes they see every day but of the rich legacy they represent.