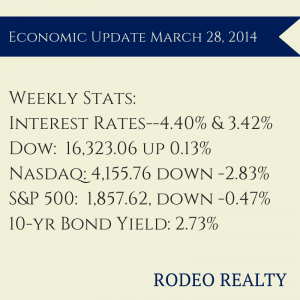 The Commerce Department reported that sales of new U.S. single-family homes fell -3.3% in February to a seasonally adjusted annual rate of 440,000 units which is the lowest level seen since last September. The rate was down -1.1% compared to February 2013. Sales fell -15.9% in the West. January’s sales were also revised downward to a 445,000-unit pace from a 468,000-unit pace. Some of the slowdown continues to be blamed on unusually cold weather but economists are predicting a rush on homes as household formation begins to accelerate again with the improving economy.  Inventory is at a 5.2 month supply, the highest level since December 2010. The median price of a new home was down -1.2% from February 2013.

Consumer confidence rose to its highest level in more than six years. The Conference Board indexrose to 82.3 in March compared to 78.3 the previous month. Consumers expect the economy to continue to strengthen and are showing optimism that both business conditions and the labor market will improve over the next six months.

The composite 20-city S&P/Case-Shiller home price index  was up 13.2% in January from a year earlier with all 20 cities showing year-over-year gains.  Prices in the 20-city index were 0.1% lower than the prior month, but that is mostly due to the cold winter throughout much of the country,  adjusted for seasonal variations, prices were 0.8% higher month-over-month.  For the Los Angeles metro area, prices were up 18.5% year over year and down -0.3% month over month (but up 0.4% once seasonally adjusted).

The National Association of Realtors® reported that its seasonally adjusted pending home sales index was down -0.8% to 93.9., it was down -10.5% from February 2013. A combination of cold weather, higher mortgage rates, and limited inventory have cramped the market but most economists are expecting a spring rebound.

The California Association of  Realtors®  however saw that pending sales were up in February, jumping 14.2% from January but down -12% from last February. The index rose from 84.8 in January to 96.8 in February and was 110.1 in February 2013. Distressed sales continue to be a smaller part of the market. Equity sales were up statewide, increasing to 85% from January’s 84.4%. In Los Angeles, single-family distressed sales were 14% of the market compared to 16% in January and 32% one year ago.

Next week will be a big week for economic news. Perhaps the most telling report that could impact interest rates is the jobs report which will come out at the end of next week. Expect rates to rise on a good report, 180,000 new jobs or more. Expect rates to remain stable at 160,000 or so, and if the report comes in much lower rates could drop! Good news for the economy is bad news for interest rates ( they rise), and bad economic news is good news for rates ( they fall).

Locally we are seeing a spring surge in prices. we are not seeing as many new listings as we would usually see in March, but I would expect many more in the next few months!