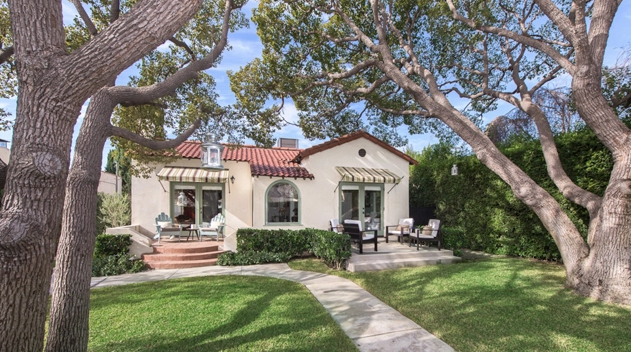 Stephen Huvane, among the mightiest of Hollywood’s most powerful celebrity publicists, has hoisted up for sale a fairly modest although hardly inexpensive Spanish-style cottage in West Hollywood, with an asking price of $1.75 million. The veteran PR potentate, whose miles-long roster of A-list clients at Slate PR includes Jennifer Aniston, stands to make a pretty penny on the property he picked up, per property records, in October 2002 for $752,000.

Tucked behind secured gates and a high, scrupulously trimmed privet hedge, the carefully kept 1920s residence has three bedrooms and two bathrooms in 1,950 square feet of updated interior space that integrates 1920s period details with modern-day creature comforts such as a whole house sound system. Ebony hardwoods run throughout the main living spaces, which include a picayune foyer and a petite living room with Batchelder tile fireplace, an adjoining dining room and a separate den with French doors that open to a tree-shaded front-yard patio. Renovated since the residence was featured half of a dozen years ago in Architectural Digest, the kitchen has jet-black solid surface countertops on crisp white Shaker-style cabinetry set off by light turquoise tile backsplashes. Privately situated at the rear of the residence, the wall-to-wall carpeted master suite, with a somewhat scant bathroom with double sink vanity, has two sets of French doors that open to a small but smartly arranged and hedge-girdled backyard that cleverly packs in a small deck and a lower lounging terrace with fire pit and built-in banquette, a plunge sized swimming pool and raised spa, and a detached garage converted to additional living space.