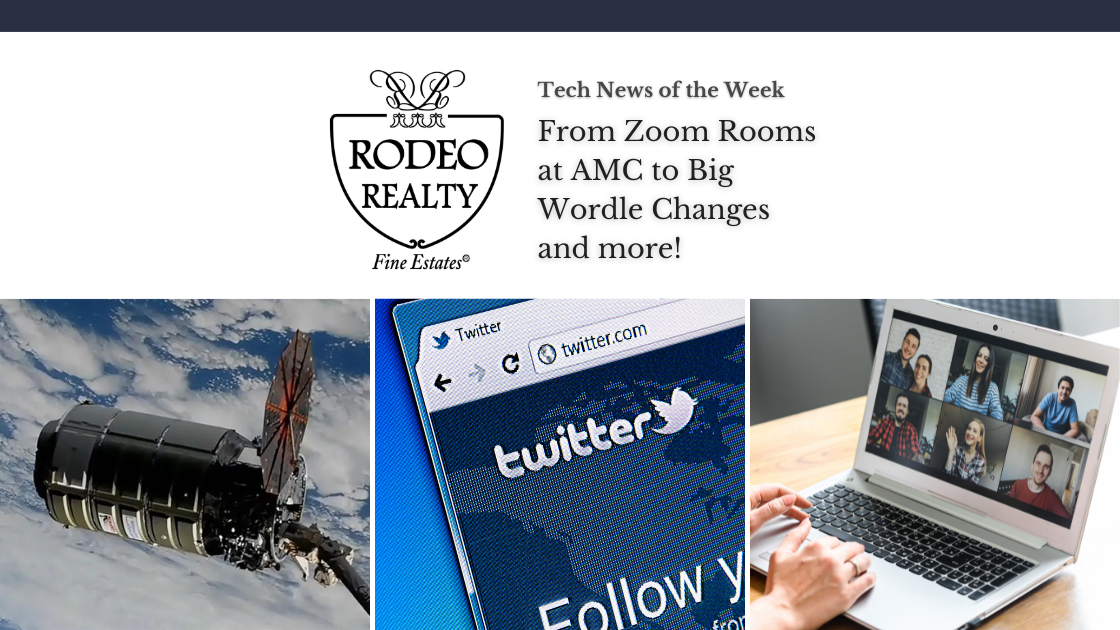 With another week in November gone, it’s time to connect with the tech news you missed. From Zoom rooms at AMC to big Wordle changes and more, we have you covered for this week’s tech news.

If you have ever wondered how your Zoom meeting would look on the big screen, you’ll soon be able to find out. AMC Theaters has partnered with Zoom to transform select movie theaters into enormous videoconferencing Zoom Rooms. The service will offer companies with decentralized workforces and customers a way to bring people from different markets together. AMC said the venture will be “for cohesive virtual and in-person events and meeting experiences,” as noted in a release. A company looking to book a movie theater can do so online for three-hour blocks of time with capacity ranges between 75 and 150 seats. The Zoom Rooms at AMC will offer traditional movie theater food and beverage options.

The Northrop Gruman NG-18 Cygnus space freighter has arrived successfully at the International Space Station after a minor glitch. During the launch, one of the spacecraft’s two solar arrays unfurled, but the craft still managed to dock this past week. Cygnus is loaded with 4 tons of hardware, crew supplies, and research equipment. It launched from Virginia on Monday morning. The ISS crew captured the spacecraft using a robotic arm and installed Cygnus on an available port. This particular Cygnus spacecraft is named the S.S. Sally Ride in honor of the first American woman in space.

As the Elon Musks Twitter takeover continues, many users have been left wondering how the new owner’s proposed payment system will continue. According to the New York Times, the company filed the paperwork to bring payment processing to the platform this past week. The move was also acknowledged by Musk in a Livestream with advertisers on Wednesday morning. Musk “discussed a vision for Twitter to process payments, complete with connected debit cards and bank accounts.” Musk, who is also the co-founder of PayPal, stated that Twitter’s new $8 monthly charge for a Twitter Blue subscription will set up users to segue into using the platform for payments and sending money between accounts.

The future of quantum computing is moving forward with the recent news that bodes well for long-term prospects. IBM stated this past week that its new machine called Osprey with 433 qubits is closer to eventual utility. The company has been working steadily for years to make quantum computing a commercial success. Quantum computing promises to conquer challenges out of reach of the conventional technology that powers smartwatches and supercomputers. While it will take years before quantum computing delivers on its progress, this news is still a major step forward.

Wordle’s Daily Answer will be Chosen from “a Times-curated word list.”

Fans of Wordle can expect a slight change in the game’s daily answer. The New York Times has announced the appointment of an editor to oversee the puzzle game with a specially curated list. “It will finally be our fault if Wordle is harder,” the Times said in a post on Monday. The publication also added that Wordle’s gameplay won’t change and that its answers will come from the same basic dictionary of answer words, “with some editorial adjustments” to keep the game focused on “vocabulary that’s fun, accessible, lively and varied.”