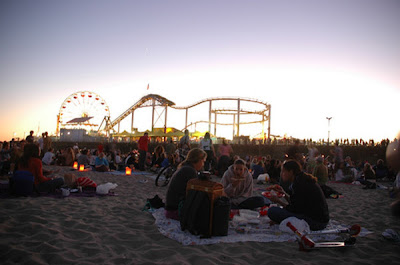 According to the recent CNN Money article, Santa Monica is comprised of more than 40 percent unmarried individuals. The endless amounts of cool beach vibe entertainment, clear sandy beaches, shopping and dining make Santa Monica the ultimate place to live fabulously.  Santa Monica is also ranked as one of the best places to live for the wealthy, particularity in one of the most exclusive and highly desired family communities, North of Montana,  where large family homes sell range in the several million dollar range.
There are many things that make Santa Monica one of the country’s best places to live. Here is one of my favorite summer events at the Santa Monica Pier which does also offer a wide variety of events throughout the year. For a great night of good music, mingling and new friends give the Twilight Concert Series a try before it ends!
Check out the last 2 summer concerts left before the close of the 28th year of the Summer Twilight Concert Series.
Read the whole article on CNN Money for the full list of “Best Places for the Rich and Single & Best Places to Live in the Country.“